Solskjaer Speaks About Long-Term Plans For Pogba
By 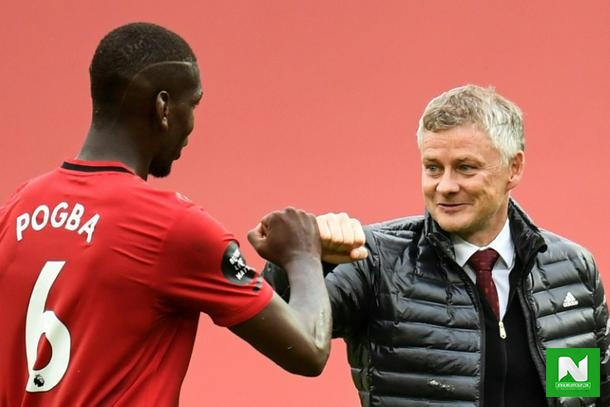 Ole Gunnar Solskjaer has laid the groundwork for Paul Pogba to sign a new contract at Manchester United.

Pogba is out of contract next summer, but the club holds a 12-month option to extend that and they will do that as the worst-case scenario.

The France midfielder has seen a dramatic turnaround in his fortunes since the Premier League restart. Pogba has been integral to United alongside Bruno Fernandes and he has repaid the faith Solskjaer had in him.

The Sun have reported that Pogba is close to finalising a huge new five-year deal at United.

The Frenchman was heavily linked with a move away from Old Trafford for some time. Indeed, his agent, Mino Raiola, continually talked up the prospect earlier this season.

The speculation came amid injuries hampering Pogba’s progress; the 27-year-old had only made eight appearances this season before lockdown due to two-foot injuries.

The Norwegian said: “Since coming back from injury he has been a delight. He has worked really hard, he is happy and he is playing well.

“We are going to see the best of Paul in the next couple of seasons, I’m sure. And I’m looking forward to seeing him grow with this team.

“He will have to be one of the leaders, one of the main figures because he is just coming to his peak time as a footballer at 27.

“I am really looking forward to working with him.”

Pogba joined United in an £89m transfer from Juventus in 2016.