Chelsea Wish Willian ‘The Best’ On Arsenal Move
By 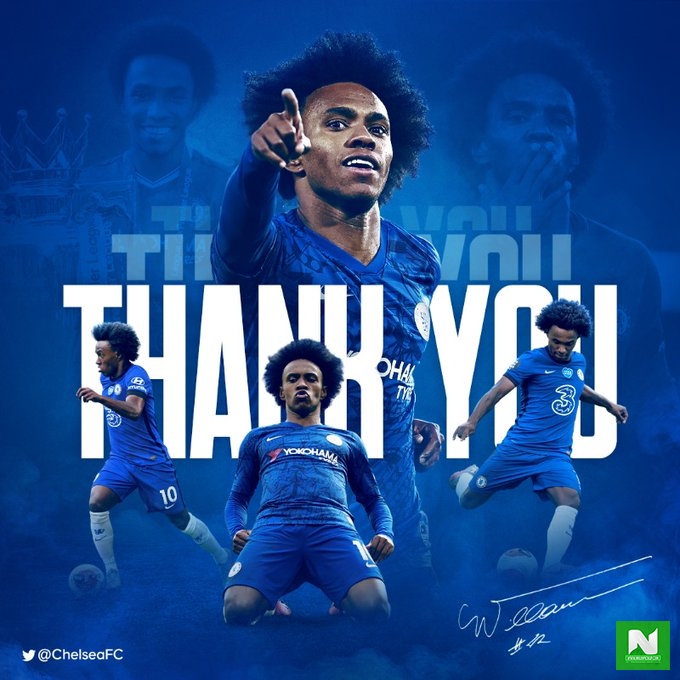 Chelsea have paid a remarkable tribute to Willian who is a step ahead of his final departure from Stamford Bridge.

The Brazilian international was soon showing Chelsea fans what he could do on the pitch, too. He opened his account with a stunning effort at Norwich City, and as he grew accustomed to the pace and power of English football his importance in the side increased, particularly during an impressive Christmas and new year period at the tail end of 2013 and beginning of 2014.

Thank you and best wishes for the future, @willianborges88! 💙

Further brilliant long-range strikes against Stoke and Southampton followed in the second half of the campaign, and his consistent threat from a wide-right position earned him a spot in Brazil’s squad for a World Cup on home soil.

Though that tournament ended at the semi-final stage for Willian and the Selecao, he would have his hands on silverware by the end of 2014/15, a seminal member of the Chelsea side that lifted the Premier League and the League Cup that season. Deployed as one of the three attackers behind a central striker, his interplay with the likes of Eden Hazard, Oscar and Cesc Fabregas was a joy to behold and ensured we led the table from start to finish.

Willian weighed in with one of the most important goals of the season, a last-minute winner against Everton that sparked delirious scenes inside Stamford Bridge, and it was his free-kick that John Terry converted to open the scoring against Tottenham in the League Cup final at Wembley.

Good set-piece delivery was a major string to Willian’s bow, never more so than during the 2015/16 season when he netted six direct free-kicks before December. His standout performances in a disappointing campaign for the team rightly earned him the two main individual prizes at the end-of-season awards.

Willian was a Premier League winner again in 2016/17, though featuring less often from the start with Pedro and his good friend Eden Hazard favoured in the wide roles. Despite that, he scored a Chelsea-best 12 goals, including two against Tottenham in the victorious FA Cup semi-final, and one on the counter in a crucial win over challengers Manchester City shortly before Christmas.

He improved on that goal tally with 13 in 2017/18, a season in which no player featured more often for Chelsea than him, with 56 appearances. A switch in formation to 3-5-2 meant he did often have to make do with a place on the bench, but he still showed spells of electric form, notably during a purple patch in February and March when he struck five times in five matches.

Among those goals was a deserved effort against Barcelona – when he had already been denied twice by the woodwork – and a powerful finish at Old Trafford.

Earlier in 2018, in a big win at Brighton, he emphatically finished off a flowing Chelsea move to net what would be named our Goal of the Season. By picking up that prize, he followed in the footsteps of his compatriots Oscar, Ramires and Juliano Belletti.

As well as that personal accolade, Willian also won the FA Cup for the first time, appearing as a late sub in our gritty 1-0 win over Manchester United at Wembley.

Willian’s penultimate campaign at the Bridge was another busy one, featuring 56 appearances, eight goals and more silverware in the form of the Europa League. He played in all 15 games in our run to glory in that competition, and captained Chelsea for the first time in the group stage opener, away to PAOK, on a night when he netted the winner.

Domestically Willian was regularly rotated with Pedro and, towards the end of the campaign, Callum Hudson-Odoi, but there was room for the spectacular in the form of superb goals against Cardiff, Burnley and Newcastle.

Fresh from helping Brazil win the Copa America on home soil having got a late call-up in the summer of 2019, Willian returned to Chelsea and, under his former team-mate Frank Lampard, produced some of the best form of his Blues career. It earned him praise from the boss for leading by example to the multitude of younger players now heavily involved.

A regular on the right side of the attack, Willian stepped up in the absence of Hazard to serve as the team’s lead creator. His individual highlight this season was undoubtedly his brace at Tottenham shortly before Christmas, goals which secured us a famous away win in our first game at their new stadium. He also struck twice from outside the box in our last two games before lockdown, and continued his good form when play restarted – including becoming the first Blue to convert penalties in three consecutive Premier League games – as we secured a precious top-four spot.

His final game, against Liverpool late last month, was his 339th Chelsea appearance. He scored 63 goals and clocked up 62 assists.

Away from the field of play Willian has been a supremely friendly and calm member of the squad for seven seasons, and his big grin will be missed by all at Cobham.

In training and in games, he combined Brazilian flair with a hard-working mentality that ensured he was highly valued by each of his Chelsea managers, and rarely out of the team for long, despite stiff competition for places.

Capable of the extraordinary, a significant contributor to five trophy wins, and a class act on and off the pitch: when Willian saw the light in 2013, he could not have hoped for a more comprehensive vindication of his decision over the next seven years. He leaves Chelsea with our best wishes for the future, and with so many wonderful moments etched in our memories.