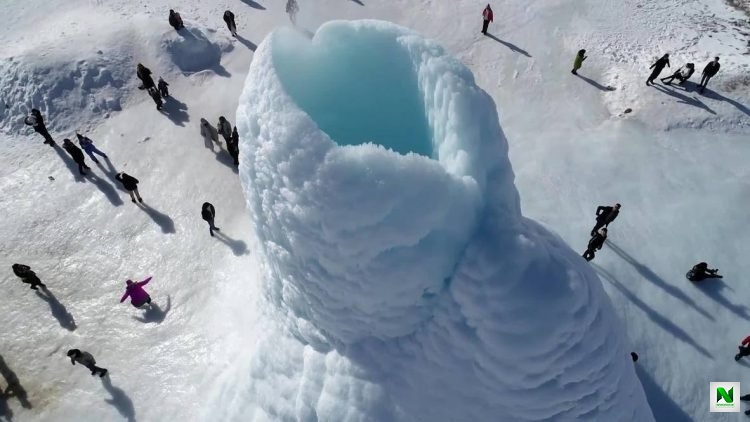 The steppes of Kazakhstan’s Almaty region are not the most inviting place, especially in winter time, but one unusual phenomenon has been attracting a lot of tourists there lately.

Located between the villages of Kegen and Shyrganak in the middle of a snow-covered plateau is a 14-meter-high ice tower that continuously spouts water which turns to ice almost instantly. The unique structure looks like a miniature volcano, only instead of hot lava, it spouts water. The sight has become popular both among locals, but also Instagram fans and influencers looking for special backgrounds for their social media posts.

According to a recent Instagram post, the ice volcano is the result of an underground spring that spouts water all year-round. In the summer, it causes a green vegetation bloom for tens of meters around it, but in winter time, when temperatures drop below zero, the water freezes creating the ice volcano cone. It continues to spray water all around, creating a natural ice-rink.

Photos and videos of the ice volcano in Almaty recently went viral on social media, attracting large numbers of visitors to the otherwise barren steppes, some of whom drove for several hours just to see the weird natural formation in person.

Interestingly, locals say that this is the first year that the volcano actually gushes water, as in previous years there was only, a smaller, empty ice cone.

“Last year there were no such water sprays spurting upwards like a fountain, but only an empty cone,” local girl Samal Zhainak told Tengri Travel.

The ice volcano is four hours away from the Kazakh capital city of Nur-Sultan, formerly Astana.