'I Am Disappointed Nigeria Will Treat Me This Way' - #EndSARS Promoter, Rinu
By 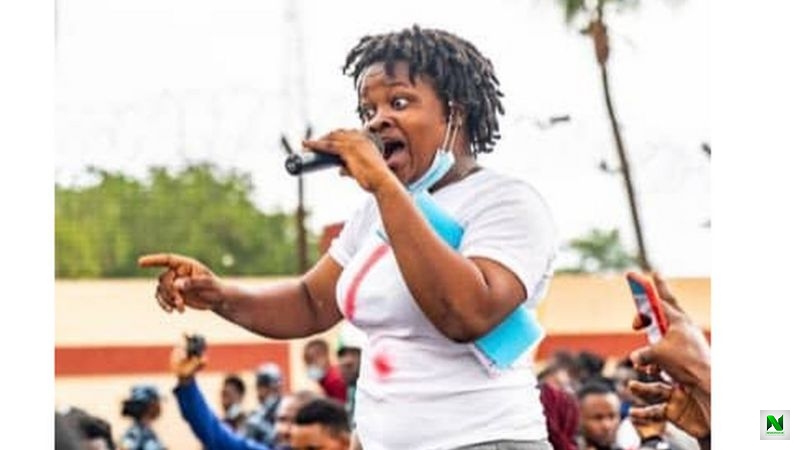 I Am Disappointed Nigeria Will Treat Me This Way - #EndSARS Promoter, Rinu Oduala Says After CBN Froze Her Account

Oluwarinu Oduala has expressed disappointment that the Central Bank of Nigeria, CBN, froze her account just because she lent her voice during the EndSARS protest, IgbereTV reports.

On November 5, the apex bank secured a court order to freeze the account of 19 promoters of the #EndSARS protests.

In a Twitter thread shared on her handle on Monday night, Rinu who is a member of the Lagos State Panel of Judicial Inquiry probing cases of police brutality and the alleged shooting of #EndSARS protesters at the Lekki toll gate, said the recent action of the Central Bank of Nigeria is a betrayal of the supposed peace-making efforts of the government.

''I am part of a generation of Nigerians, who have lived most of their adult lives under ‘democratic’ rule yet I wake up this morning feeling there is no difference between the Nigeria I grew up in and the Nigeria my parents grew up in. The sacrifices of the democrats, who bravely stood on the June 12 mandate to bring our democracy to life seem to be in vain. Ironically many are serving in this government and ruling party.

Everywhere I turn, I am told that I should be ‘grateful’ for a democracy that lives were lost, I should be thankful that I have a voice and I can speak up for myself and my peers. But how can I be grateful when young men and women disappear every day, some killed recklessly without cause, while others get scarred for life—physically, emotionally, or both.

When we began to protest it was because young Nigerians decided to speak up.

We spoke up – not because we wanted to overthrow the government but because we wanted the police to stop killing us. We did not carry arms, or incite any insurrection. Our only weapon was peaceful protest enshrined in Section 40 of our 1999 Constitution. At every point we maintained calm and educated our followers – reiterating throughout the protests that we were not there to fight the government but to ask for change and to follow through to make sure that change was effected.

We believed that somehow we would be spared from the systemic violence and breakdown of social order that was the direct result of the government’s actions. Unfortunately we were mistaken.

I was volunteered to receive donations to our cause by Nigerians at home and abroad who felt helpless to personally protest but believed they could make a difference through financial sacrifices. Such was the passion of average Nigerians to contribute how best they can to the #EndSARS cause, they found my personal account number and sent in what they could sacrifice towards the cause. Some people even sent as little ?500; all they could spare towards the cause. To have their sacrifices rubbished by the government and their motivations questioned is disheartening because the raised funds including over N200,000 naira gathered from my business were meant to be disbursed to attend to the medical bills of injured protesters.

We called for among other things, a probe into the killings and torture of people and the government agreed by setting up judicial panels. In order to assure young people of the independence and fairness of the panel I took up the role as a youth representative at the detriment of my education, personal life and family. I did this to make peace. I did to ensure our young people understood that the only way to create a better and safer Nigeria is to do things lawfully. Why am I still being targeted for lending the government my goodwill?

I am not part of Nigeria’s political or business elite—I have no relatives in government or family members with enough wealth to sway powerful individuals. I am just an ordinary young Nigerian. I study, selling hoodies and other clothing for ?5,000 to pay my school fees. I also do the odd bit of freelancing, taking on some brand influencing work to ensure my family doesn’t suffer. Somehow, however, my existence threatens my government, the fact that I have a voice is enough for them to try to silence me.

I decided to use the only currency I have, my voice to speak up against extrajudicial killings, torture, extortion and unjust harassment that is still happening in a democratic nation in the 21st century! The government also agreed that reform is inevitable and promised us they were going to listen so why punish the same people that are speaking up?

I am not afraid—I am only disappointed that this country will treat me this way.

Nigeria is all I have, and I have a right to demand that it works for all of us, not just those with influence, wealth, or a government position.

In a country that people have been voiceless for a long time, people holding the government accountable is being seen as too much? How can we ensure that this sort of thing will encourage people to build a new Nigeria? A Nigeria that will be filled with accountable government officials, where all forms of oppressions and injustice is a thing of the past. How do you expect me as a part of the future of this country to still believe in a country who thinks they have the right through CBN to freeze my account for no just cause?

This is not fair. But we will make it fair. Otherwise, there is no future for my generation and the generations to come.

Lest you forget, #EndSARS !"

All I have is my VOICE🔊

I am part of a generation of Nigerians who have lived most of their adult lives under ‘democratic’ rule and yet, I woke up today feeling there is no difference between the Nigeria I grew up in, and the Nigeria my parents grew up in.