APC Governors Consider Zoning Presidency To The North In 2023
By 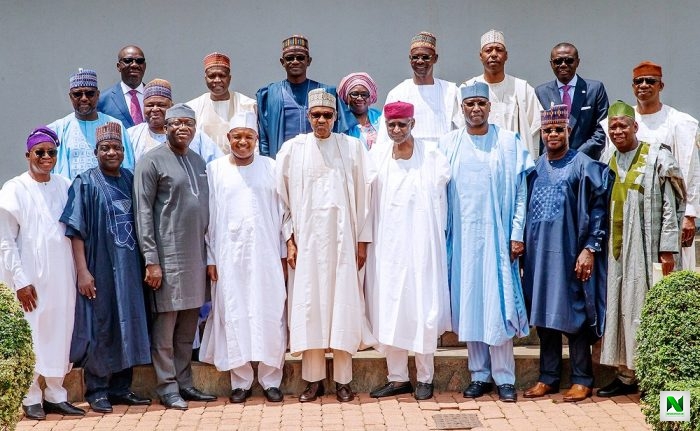 Ahead of the 2023 general elections, some governors elected on the plat­form of the ruling All Progressives Congress (APC) are plotting to cede the presidential ticket of the party to the North, Daily Independent has gathered.

This was revealed to Daily Inde­pendent by one of the governors in the party who is from the Southern part of the country at the weekend.

When asked if the presi­dential ambition of Governor Yahaya Bello of Kogi State was a joke, the governor – who asked not to be named – said he believed his counterpart in Kogi was serious as there had been a clamour by some of his colleagues in the Pro­gressives Governors’ Forum (PGF) that the North retains the presidency after Presi­dent Muhammadu Buhari’s tenure.

While saying the APC gov­ernors who wanted the party to zone the ticket to the North were in the majority, he, how­ever, said the other governors from the South were watching the development and would make their stance known at the appropriate time.

When pressed further on why the governors wanted the North to retain the ticket, he said there were strong in­dications that the opposition Peoples Democratic Party (PDP) would pick its presiden­tial ticket from the Northern part of the country and that the APC governors “felt the need to match them power for power”.

He said: “Honestly, I don’t know his (Bello) mind, but from what I have seen, I think he is serious about running for the presidency and he has a right to do so. Even if the APC zones the ticket to the South, that won’t stop him from exercising his right if he feels he has what it takes to swing the delegates’ votes to his side.

“But what I know is that some of them are canvassing that the North should still produce the candidate. That is absurd to some of us based on the fact that President Mu­hammadu Buhari, a North­erner, will be completing eight years in 2023. However, their argument is that with feelers that the PDP may zone its ticket to the North, it will be wise for the APC to do likewise so that they can match them power for power, or divide the votes in the region.

“Another argument they canvassed was that if the PDP presents a Northern presidential candidate and the APC fields a Northerner, there is a probability that the Northern electorate would queue behind their own.”

Corroborating the gover­nor’s claim, another chieftain of the party from the South West said the body language of the president and some key APC leaders showed that the Southern part of the country may lose out in the presiden­tial race.

“I believe what the gover­nor said. There are plans to scheme out the South West and those of us who are here are watching the develop­ments with keen interest.

“There is something sinis­ter about the ongoing mem­bership registration process and I’m glad some of our lead­ers here have expressed their reservations,” he said.

Also speaking on the issue, Prof. Oserhiemen Osunbor, a former governor of Edo State and an APC chieftain, said he would be surprised if the ticket was zoned to the North given the fact that the founda­tion documents of the party recognised rotation of the presidency between North and South.

“Yes, I will be surprised if the ticket is zoned to the North. This is because the foundation documents of APC and the understanding by its leadership at its forma­tion recognised rotation of the presidency between the North and the South, among other matters.
“I expect that this will be respected. However, should there be compelling reasons for the party to decide other­wise for overriding national interest or cogent reasons, the party is at liberty to review its position,” he said.

It would be recalled that there have been divergent views over the zoning of the presidential ticket in the APC.

Last year, Minister of Works and Housing, Baba­tunde Fashola, had urged the party to respect its zoning formula in picking its presi­dential candidate for the 2023 elections. He had described the decision as the core of the agreement reached by APC founding fathers prior to the 2015 elections.

Fashola, who was Lagos State governor when the APC was founded and was a crit­ical stakeholder at the time, said: “The truth is that what makes an agreement spectac­ular is the honour in which it is made, not whether it is written.

“If it was written, there would be no court cases of breach of contract because it’s a document that is written and signed that goes to court. The private agreement you make with your broth­er and sister should not be breached. It must be hon­oured.”