Amotekun Intercepts Truckload Of Armed Fulani Herdsmen In Ibadan
By 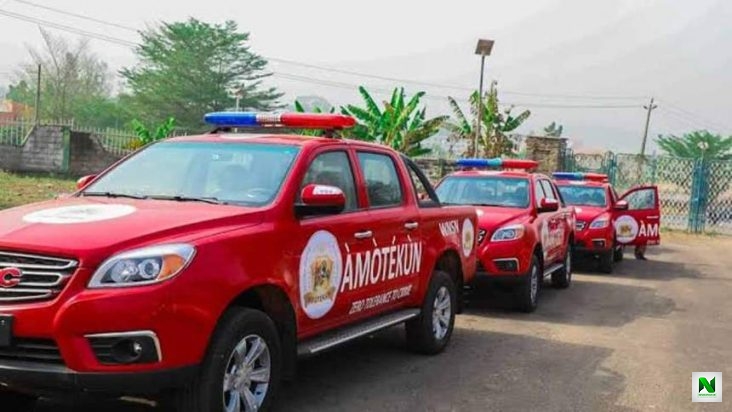 Men of Oyo State Security Network Agency known as Amotekun have intercepted a truck loaded with no fewer than 80 men suspected to be Fulani herdsmen at the Iwo Road area of Ibadan, the Oyo State capital.

The men, who were loaded in a truck were reportedly stopped by the Amotekun corps and a quick search revealed some bows, arrows and daggers in the the vehicle.

Apart from that, sources told our correspondent that there were about 25 motorcycles in the truck which also had cows.

Upon interrogation, the men were reported to have told the Amotekun operatives that they were going to Lagos and Ogun States.

The search was said to have attracted residents who trooped to the scene, but to avoid crisis, the security agents were said to have led the truck and its occupants to the police station at Testing Ground area in Iwo Road.

They were said to have been handed over to the police at the station for further interrogation and search.

The Commandant of Amotekun in Oyo State, Col. Olayinka Olayanju (retd.), When contacted confirmed the incident to our correspondent.

He said, “We arrested about 80 men in a truck. We found some bows and arrows and knifes in the truck. They also had some cows and motorcycles there.

“We couldn’t carry out a thorough search because we had started started attracting attention so we moved them to the police station nearby.”

The Police Public Relations Officer in Oyo State, Mr Olugbenga Fadeyi, also confirmed the incident to our correspondent on the telephone.

“We didn’t find anything incriminating on them. They were released and escorted to the Toll Gate area on Lagos-Ibadan Expressway. They are no longer in Oyo State territory.”