This Government Has Failed, There Is No Way To Cover It - Senator Abaribe
By 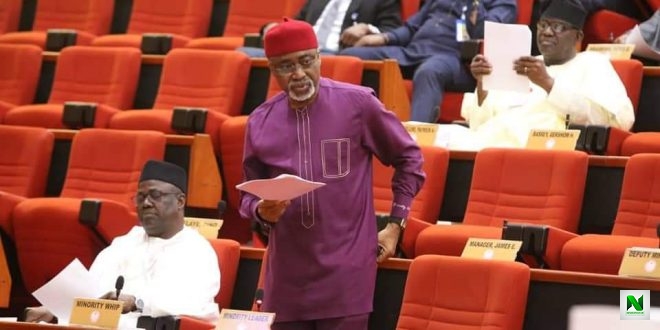 Senator Enyinnaya Abaribe believes the President Muhammadu Buhari government has failed the country, insisting that there is no way to paper over their failures.

“The party (PDP) has its position and the position is very simple: this government has failed,” the Senator who represents Abia South said on Friday’s edition of Channels Television’s Sunrise Daily.

“You don’t have any other way of trying to cover it. You can say all the rhetoric, you make all the propaganda. You can go ahead and try to pull the wool over the eyes of the people but the #EndSARS protest showed a failure of this government. It is not that is just failing now. It has been failing all along and we have been continually pointed it out.”

The Senate Minority Leader accused the government of failing to listen to advice and always seeing every counsel as an opposition that should be crushed.

He claimed the present government is mired in the past and does not have any connection with the 21st century.

“On the floor of the Senate, I have always spoken, ‘You are not getting it right,'” he explained.

“The only problem we have with this government is that advice to them is like an opposition they need to crush. They just think that in the 21st century that with all the information we have; with all the contacts that we have with the rest of the world, that people will just continue being subdued as they used to do in Stalin’s country (formerly the Soviet Union) or in North Korea and all that.”

While reiterating that the Buhari administration has failed in delivering development to the nation, he stated that “all we are waiting for is to throw out this government in the next election.”