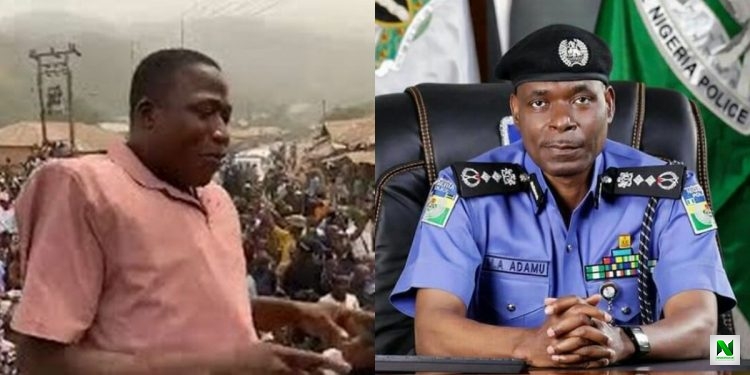 The police in Ogun State said the recent attacks on Fulani herdsmen’s settlements must stop henceforth.
Police threatened that kingpins, procurers and counsellors of the hoodlums who attacked the Fulani settlement in Igua will also be fished out to face the law.

This is coming barely four days after the popular Yoruba freedom fighter, Sunday Adeyemo (aka Sunday Igboho) visited Oja Odan, Igua and other communities to chase away those he called killer herdsmen.

DAILY POST reports that Sunday Igboho’s visit led to the burning of Sarkin Fulani of Igua’s house and a cattle market, even as the Ogun State Government said it did not request Sunday Igboho’s help in tackling the suspected killer herdsmen.

Reacting to the incident on Friday, the Ogun police command confirmed that “there have been some attacks in the past three days on herdsmen’s settlements in the State, especially in Yewa part of the State.”

Making a veiled reference to Igboho, the command said, “The attack on herdsmen’s settlements in Ogun State must stop now.”

The police said it noted with sadness that the settlements affected have been in existence in the area over 20 years, and are inhabited mainly by Nigerian herdsmen of Fulani extraction, some of whom, it said were born and brought up in the area.
These Fulani herdsmen, according to the police, speak Yoruba language with proverbs fluently and elegantly, saying, “they are generally qualified to be called fellow Yorubas!”

The command’s Public Relations Officer, Abimbola Oyeyemi, in a statement, stated that “it is unlawful, indeed unconstitutional, to deny fellow Nigerians the right to live in any part of the country and pursue their legitimate businesses, including cattle rearing.”

However, Oyeyemi cautioned herdsmen to avoid destruction of farmlands, which, he noted, has been identified as the reason behind the unending clashes with farmers and host communities.

The Command also calls on both farmers and herdsmen, indeed the entire Yoruba and Fulani communities in Yewa and across the State, to fish out criminals, especially herdsmen visiting from other states and neighboring countries, who are perpetually creating tension amongst them, thus undermining their long and cherished history of peaceful coexistence,” Oyeyemi advised.

According to him, a stakeholders meeting was held on Thursday, at the palace of Alaye of Ayetoro.

Oyeyemi told DAILY POST that the meeting was attended by representatives of the Fulani and Yoruba communities, including heads of all the security agencies like the army and the DSS.

At the meeting, it was gathered that “wanton destruction of farmlands by cattle, kidnapping and raping of women as well as reprisal attacks on Fulani settlements were unanimously condemned as criminal and unacceptable, irrespective of the status, tribe or nationality of the perpetrators.”

DAILY POST learnt that the police has arrested some suspects in connection with the recent incidents, promising to make example of them to serve as deterrent to others.

“The Command therefore enjoins all the good people of Ogun State to join hands with security agencies in promoting peaceful coexistence amongst all Nigerians living in the State.

In the same vein, all the security agencies, have resolved to deal decisively with miscreants and brigands alike, who are bent on fomenting trouble in the State.

“Parents are therefore advised to call their wards to order, as anyone caught fomenting trouble in any part of the State will be dealt with decisively,” the statement read.