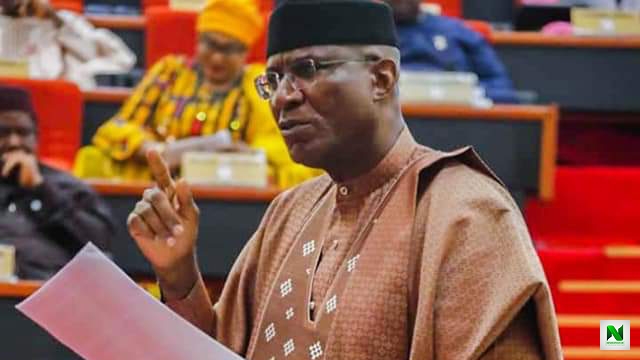 Rules out merger of Senate, House of Reps
Deputy Senate President, Ovie Omo-Agege, has urged Nigerians not to engage in wishful thinking that the 9th National Assembly would deliver a new constitution, saying it lacks the mandate to do so.

According to a statement by his Special Adviser on Media and Publicity, Yomi Odunuga, Omo-Agege made the comment when he hosted members of the Alliance of Nigerian Patriots led by Ambassador Umunna Orjiako in Abuja.

The deputy senate president, who chairs the Adhoc Committee on Constitution Review, explained that the National Assembly had no powers to replace the current constitution of the country but could only amend it.

He cited advanced democracies like the United States of America after which Nigeria’s presidential system of government was fashioned as well as Sections 8 and 9 of the 1999 Constitution (as amended), saying what is obtainable is piecemeal alteration of the constitution.

Omo-Agege, therefore, urged those calling for a brand new constitution to channel their energy towards participating actively in the ongoing amendment by the National Assembly.

“One of the issues you raised is the replacement of the 1999 Constitution. I am not so sure that we, as a parliament, have the power to replace the constitution. We can only make amendments. And it is explicit in Sections 8 and 9 of the constitution how we can do that and the requisite number of votes required.

“I say that because there are some top attorneys in this country who, for some reasons, keep saying that we don’t even need any of this, that we should just bring a new constitution. We can’t do that. What we are mandated to do by law is to look at those provisions and bring them up-to-date with global best practices, especially to the extent that they tally with the views of the majority of Nigerians. So we are not in a position to replace this constitution but we can only amend,” he said.

The lawmaker described the proposal by the delegation that zones should replace states as another euphemism for going back to the regions.

“We will look into that if that is what majority of our people want. You talked about devolution of powers. The preponderance of views we have received so far is that those 68 items are very wide and need to shed some weight and move them to the Concurrent Legislative List,” he said.

On the call for scrapping of the upper legislative chamber, Omo-Agege said;

Earlier, Orjiakor called for the reconfiguration of the present 36 states structure into six zones as federating units, drastic cut in the Exclusive Legislative List and expansion of the Concurrent Legislative List, reform of the National Assembly to a hybrid presidential and Westminster systems, abolition of security votes to be replaced by regular security budget allocations and electoral reforms to ensure a truly independent Independent National Electoral Commission (INEC).