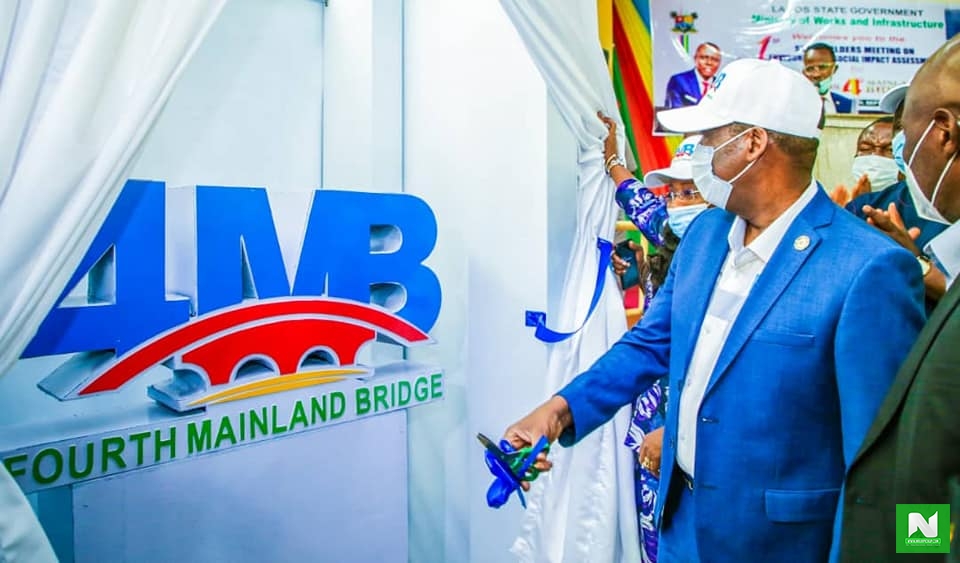 A major step towards the realisation of the 4th Mainland Bridge was today, taken by the State Government with the first stakeholders meeting on Environmental and Social Impact Assessment for the construction and launch of the Bridge’s logo.

Speaking at the meeting, Governor Babajide Olusola Sanwo-Olu, who was represented by his Deputy, Dr. Kadri Obafemi Hamzat, described the event as a significant one in the joint effort to change the narrative of the socio-economic development of the State, through the provision of critical infrastructure for sustainable prosperity. The Governor emphasised that the proposed Fourth Mainland Bridge has been well integrated into the overall Lagos Master Plan in relation to transportation infrastructure, adding that the project allows for the first time, direct access from the large suburb of Ikorodu to the Island and the Lekki Free Trade Zone area.

While noting that the present administration has left no stone unturned in ensuring that the strategic project becomes a reality, Sanwo-Olu disclosed that the State government reactivated the construction of the bridge in October 2019 with the development of a six-step process that will lead to the selection of a suitable concessionaire in line with global best practices.

He emphasised that the stakeholder-engagement and consultation on Environmental and Social Impact Assessment was a precursor to the third step, which will involve issuing a “Request for Proposal” to the six consortia for the presentation of their respective financial proposals and methodologies for carrying out the project.

According to him, “The stakeholders’ meeting was organised to open the project to further inputs, comments, ideas and observations for incorporation into the ongoing social and environmental impact assessment. We hope the meeting would boost the acceptability and implementation ratings of the 4th Mainland Bridge in line with global best practices”.


In her welcome address, the Special Adviser to the Governor on Works and Infrastructure, Engr. Aramide Adeyoye stated that the meeting was another bold step by the present administration towards ensuring the buy-in of Lagosians into the government project and another fulfilment of the promise of Mr. Governor to adopt inclusiveness as a tool for governance.

She explained that as the primary coordinator for the project, the Ministry has arranged a number of meetings with the relevant Ministries, Departments and Agencies (MDAs) in the State to inform all stakeholders and foster progress on the project.

In his goodwill message, the Minister for Works and Housing and former Governor of the State, Mr. Babatunde Raji Fashola, represented by Dr. Adetunji Adeoye, commended Lagos for the construction of the Fourth Mainland Bridge, adding that the construction will create a lot of activities and job opportunities for residents.

He, therefore, assured the people and government of Lagos State of his unalloyed support towards the construction of the bridge.

The Minister of State for the Environment, represented by Mrs. Oluwatoyin Agbenla, described the Fourth Mainland Bridge as an endearing project to the citizens, which will be executed with the highest levels of environmental sustainability.

The Fourth Mainland Bridge is a 37.4km freeway subdivided into three sections namely Island Section, Lagoon Section and Mainland Section. It will commence from Abraham Adesanya Roundabout in Lekki through Ajah and Langbasa areas, crossing the Ado Badore Road before arriving at the Lagoon shoreline.

The road crosses the Lagoon via a 4.5km Lagoon Bridge landing between Bayeku and Ijede villages, passing through Ikorodu-Epe expressway to further link Isawo Road and from there to Lagos/Ibadan Expressway.