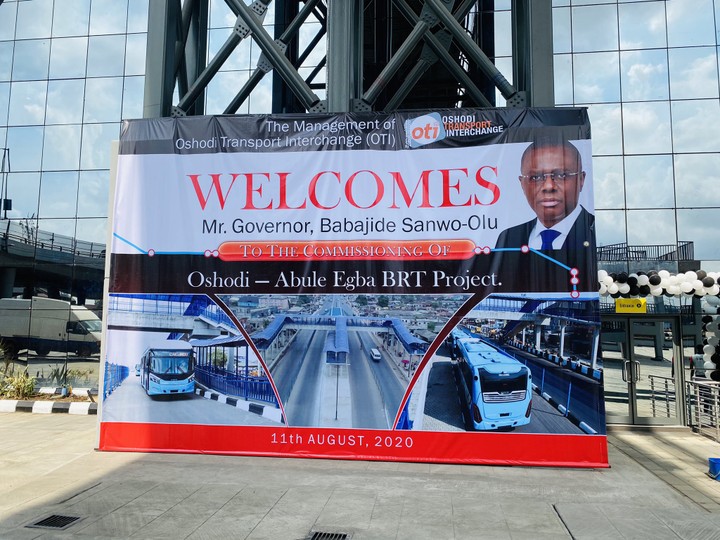 The governor said the 13.65 kilometer journey to Abule-Egba from Oshodi, which used to take over an hour, would now be completed in less than 30 minutes.

Speaking during the inauguration of the BRT system infrastructure at the Dopemu bus shelter, Sanwo-Olu said the ceremony was a fulfilment of his administration’s pledge to significantly improve traffic management and transportation system in the state.

“This is the very first of our six-point development agenda encapsulated as T-H-E-M-E-S. This administration made the pledge knowing that you, our people, are the main reason we have been entrusted with the management of your commonwealth”.

“Although our promise was to deliver this project in May this year, it had to be shifted forward due to the disruption brought about by COVID-19”.

According to the governor, the bus transit system had proven to be an effective means of achieving a fast, reliable and efficient movement of large number of people across the state.

“Since March 2008, when the first phase of this new initiative was launched, thousands of Lagosians have continued to enjoy improved travel experience along the designated routes every day.

In order to ensure that the BRT service is accessible to greater number of our people and in line with the Lagos state strategic transport master plan which seeks to integrate road, water and rail transportation, new corridors and routes are being opened”.

The governor said the project was very significant because of its immense benefits to Lagosians in the different communities it straddles and to visitors.

“This new BRT corridor will bring great relief to over 60,000 commuters who will use this facility daily. Travel time, which is estimated at an average of two hours during peak periods, will be significantly reduced to an average of about thirty minutes. This will translate to improved health of our people, a safer environment, and increased value of socio economic activities in our state.”

While acknowledging that the project was started by his predecessor, Sanwo-Olu said it was one of the dividends of his administration’s investment in the transport sector for efficient traffic management and transportation.

“The completion of this project which was commenced by the past administration is one of the dividends of this administration’s investment in the transport sector for efficient traffic management and transportation which we believe is crucial to facilitating the emergence of a smart and 21st-century economy.

“All our actions are geared towards birthing a new commuting order through seamless travel in a near congestion-free state. This administration is very keen to see all transport modes integrated through all our intervention in traffic management and transportation,” Sanwo-Olu said.

In her welcome address earlier, the Managing Director of Metropolitan Area Transport Authority, LAMATA, Engr. Abimbola Akinajo said the four projects rolled into one attest to the commitment of the Governor to live up to his promise to reform traffic management and public transportation, which is the first pillar of the THEMES agenda of the Governor.

“Mr. Governor, permit me to state that the socio-economic importance of the project cannot be over-emphasized. The Oshodi – Abule-Egba Corridor is undoubtedly one of the busiest 13.65km long bus corridors in West Africa, with over 5,500 mini-buses moving passengers per day.

“It is a major link for millions of Lagosians who commute in and out of Alimosho, Egbeda, Ijaiye, Iyana-Ipaja and other places to other parts of Lagos or to neighbouring Ogun state and the Republic of Benin.

“This new BRT corridor will bring about an improved mobility with the capacity to move over 350, 000 passengers per day, reduce travel time by at least 35%, enhance social and economic development along the corridor and enhance the projection of Lagos as a world class society amongst others,” she said.