EndSARS: Osinbajo, Six Governors To Engage Youths, CSOs, Others
By 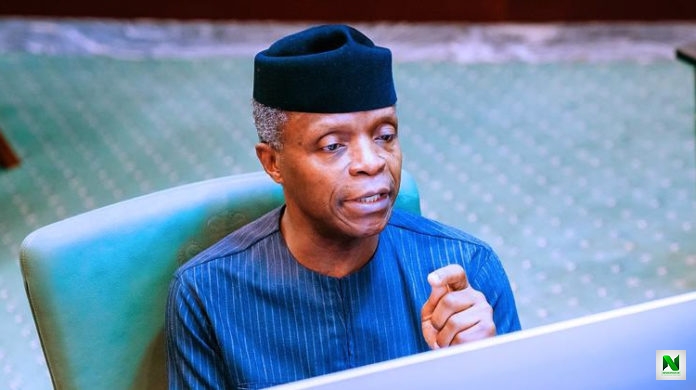 Vice-President Yemi Osinbajo will be heading a committee that has six state governors as members to engage youths, representatives of Civil Society Organisations, religious and traditional leaders on the fallout of the recent #EndSARS protests.

Members of the committee will be engaging the stakeholders on employment, social safety net programmes, and national unity among other key issues of concern.

The decision was reached at an emergency meeting of the National Economic Council chaired by Osinbajo on Monday.

The council, which is chaired by the sitting Vice President, has also state governors, relevant ministers, and the Governor of Central Bank of Nigeria as members.

Members of the committee are six state governors representing the six geopolitical zones of the country.

They are the governors of Sokoto, Borno, Niger State, Ondo, Ebonyi, and Delta states.

The committee, which is to commence work immediately, will develop a comprehensive framework under the auspices of NEC that would coordinate joint actions and steps to be taken by both the federal and state governments to examine the fundamental issues underlining the protests and arrive at effective solutions, including how to enhance Nigeria’s national security.

The council also commended the Nigeria Police Force and other security agencies for their handling of the disturbances in some states.

The communique read, “Council agreed to embark on an objective framing of a new security and stability architecture for the country supported by the development of a framework of engagement with the youth, civil society and religious leaders; a framework for national unity; a framework to engage with security agencies that will devolve more control to state governors who are the chief security officers of their states; a framework for federal support to provide compensation for those who have incurred losses in the last few weeks and a framework for social security to deal with the problem of unemployment and poverty in the country.

“A joint committee was consequently set up by the Chairman of Council, Vice President Yemi Osinbajo, SAN, to work with state governments represented by the governors of Ebonyi, Ondo, Niger, Delta, Borno and Sokoto States to implement the resolutions of the emergency meeting.”

The council also commended the Nigeria Police Force and other security agencies for their handling of the disturbances in some states.