EndSARS: Lawyers Protest Against Sanwo-Olu Presiding Over Judicial Panel Of Enquiry
By 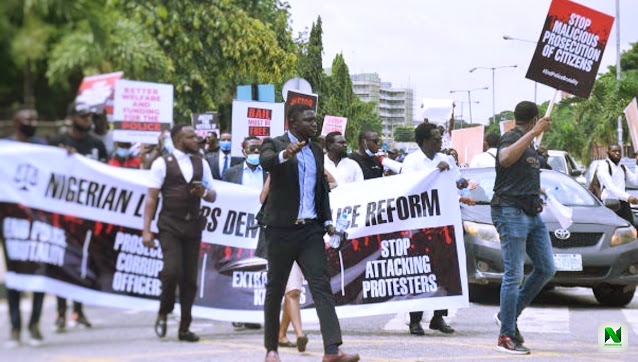 A coalition of human rights activists under the aegis of New Nigeria Network (NNN) comprising of Radical Agenda Movement in the Nigeria Bar Association (RAMINBA), Federation of Informal Workers’ Organization of Nigeria, Coalition for Revolution (CORE), Take it Back Movement, Movement for A Socialist Alternative (MSA) and Socialist Workers and Youth League (SWL) among others in Ikeja, Lagos State Nigeria has come out to protest against the Lagos state governor, Babajide Sanwo Olu, from presiding over the Panel of inquiry setup.

According to the Chairman, Barrister Adesina Ogunlana, it is illegal for the governor to preside over the Panel as he is an involved party, and an involved party can not be an investigator in a case he is indicted for.

The lawyers said that it would have been a different case if the Governor had initially accepted that he invited the military as the Chief Security Officer of the State, but he made the disclosure after the army's revelation.

The Lawyers said it is not possible to be the Accuser, Investigator, and Judge in a case and so the government's involvement has affected the credibility of the panel.

The New Nigeria Network is an amalgamation of progressive forces that actively participated in the #EndSARS movement. The activists said the EndSARS Protest is an unfinished task that cannot be abandoned.