20 Generals May Go As Buhari Sacks Buratai, Service Chiefs
By 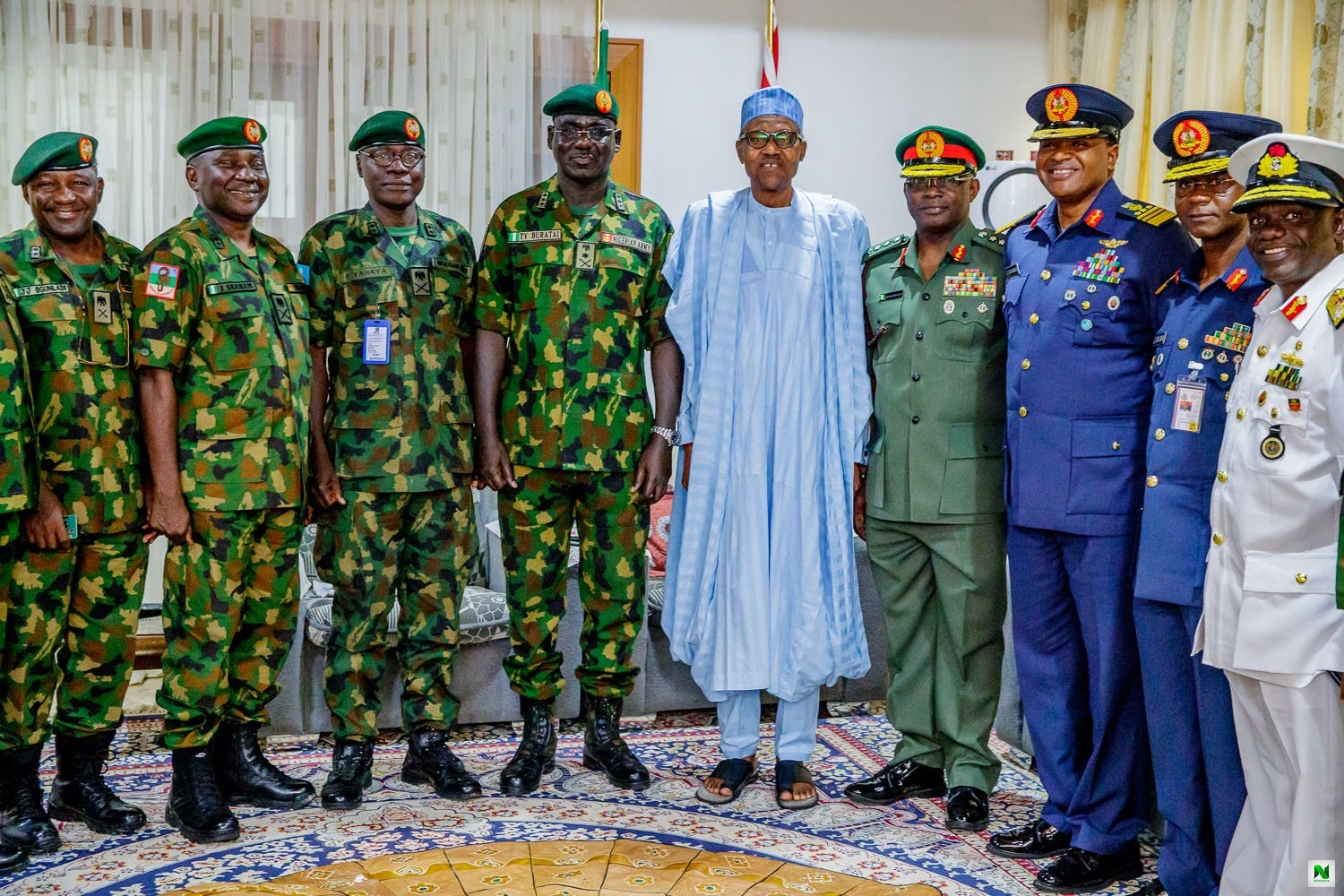 No fewer than 20 members of courses 34 and 35 may proceed on retirement as the President, Major General Muhammadu Buhari (retd.), on Tuesday removed service chiefs and appointed a new set of officers to replace them.

The Special Adviser to the President on Media and Publicity, Femi Adesina, in a statement titled, ‘President Buhari appoints new service chiefs,’ named officers who would head the nation’s armed forces.

Earlier in his statement, the Presidential spokesman, Adesina, stated, “President Muhammadu Buhari has accepted the immediate resignation of the service chiefs, and their retirement from service.

“President Buhari thanks the outgoing Service Chiefs for what he calls their ‘overwhelming achievements in our efforts at bringing enduring peace to our dear country,’ wishing them well in their future endeavours.

“The President congratulates the new Service Chiefs, and urges them to be loyal and dedicated in the discharge of their responsibilities.”

The PUNCH gathered that chief among those expected to retire is Lt. Gen. Lamidi Adeosun, the Chief of Training and Operations, Army headquarters.

He was promoted in 2019 to the same rank as Buratai by the President.

The PUNCH gathered that although many of the senior officers might retire, the service years of some of them might be extended by the new chief of army staff who would need their experience in the ongoing counterinsurgency campaign in the North-East.

It was also learnt that some of them might be posted to the defence headquarters, where they would not be reporting to the chief of army staff.

A retired general said, “We have the dearth of officers with experience in Liberia and Sierra Leone wars because it takes gut to fight these boys (insurgents). They use the same tactics we fought against in Sierra Leone and Liberia. It is not automatic that members of Course 34 and 35 would retire.

“Course 33 has gone, we have 34 and 35. Irabor is Course 34. Attahiru is course 35. About 20 generals in course 34 and 35 may go, but the COAS may retain some of them. He would use his discretion. He would want his course mates to be around him. Some may be posted to the defence headquarters.”

A retired officer, who spoke on condition of anonymity, recalled that there was a frosty relationship between Buratai and Attahiru.

Buratai had in 2017 removed Attahiru as Theatre Commander of Operation Lafiya Dole following a spate of attacks by the insurgents, including the killing of at least 50 people in a mosque.

Attahiru had taken over the command in May 2017, from Irabor who is now the CDS, but suicide bombings and attacks on military formations increased drastically under him.

In June, barely a month after he took over, Boko Haram insurgents attacked Maiduguri, the Borno State capital.

A month after, a group of geologists and technologists from the University of Maiduguri were ambushed by Boko Haram insurgents at Magumeri area of Borno state. About 12 soldiers who escorted the academics were reportedly killed.

Some staff of the Nigerian National Petroleum Corporation on the team were also killed in the brutal ambush.

Attahiru was subsequently removed and posted out of the combat zone.

In his valedictory speech at the operation, Attahiru had described his posting as routine.

He stated that his team killed five Boko Haram commanders and neutralised 70 terrorists while he was at the helm.

Attahiru had said, “Suffice to note that during the operations, 5 high profile BHT commanders and many foot soldiers were killed, while many other members of the group surrendered owing to the effectiveness of the operations,” Attahiru said in December 2017.

“None kinetic operations were also conducted through coordinated media and information operations that led to the surrender of 72 BHT, who were immediately inducted into Operation SAFE CORRIDOR.

“Furthermore, operational support was also provided to troops of Multinational Joint Task Force during Operation RAWAN KADA in June 2017, which led to the killing of over 70 BHT and the capture of assorted automatic weapons.”

Following the increasing attacks by Boko Haram insurgency in the North-East and banditry in the North-West as well as activities of killer herdsmen in other parts of the country, the National Assembly, the northern socio-political organisation, the Arewa Consultative Forum; its counterpart in the South-West and Ohanaeze Ndigbo, called for the removal of the service chiefs, who were appointed in 2015.

But the Presidency has repeatedly dismissed such calls, saying it was the President’s prerogative to appoint and remove heads of the country’s armed forces.

Reacting to the removal of the service chiefs and appointment of new ones, a chieftain of the All Progressives Congress in Niger State Mr Jonathan Vatsa, in an interview with The PUNCH, said the President’s action came late as the military had been bastardised already.

On his part, Kaduna State Christian Association of Nigeria Chairman and Vice Chairman (19 Northern States and Abuja), John Hayab, said the removal of the service chiefs was long overdue.

He stated, “Nigerians have received these changes as something long overdue that is why we will not celebrate much but pray more for them to make a difference.”

The National Publicity Secretary of Afenifere, Yinka Odumakin, told The PUNCH that the changes were belated. He also wondered why an officer from the South-East was not appointed.

He said, “We are not excited about the belated action of Mr. President. So much has been done to damage the security architecture under nepotism.

“We can only be impressed with the new team when we no longer hear that soldiers are accompanying herders to beat people like it happened in Ogun days back.

“We will want to see inclusive security arrangement to be convinced that normalcy is about to return. We also will like to know why no person was found worthy from the South-East in the new team.”

Also, some Senators asked the newly appointed service chiefs to hit the ground running by tackling the worsening insecurity across the country.

Senator Enyinnaya Abaribe (Abia South) said, “The appointment of new service chiefs is better late than never. We have been calling for this for a long time now.

“Let us hope that this team would stem the tide of insecurity”.

On his part, Opeyemi Bamidele said, “This is just one out of a number of steps needed to be taken, to tackle insecurity which is making life difficult for Nigerians.