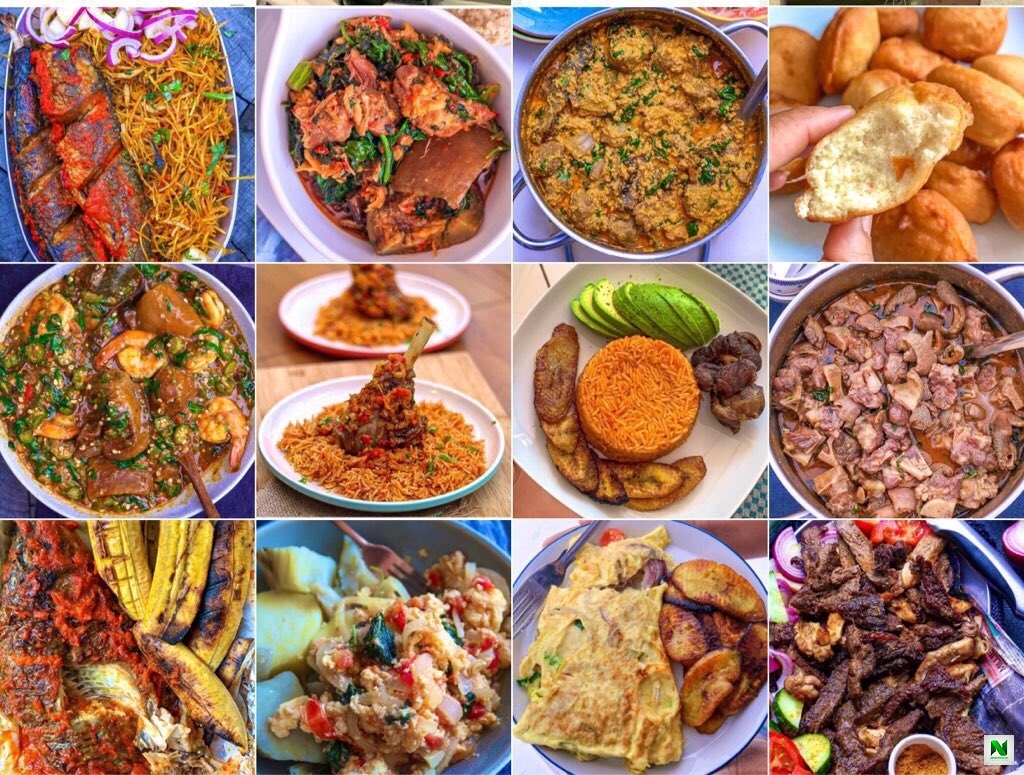 Do you want to take your taste buds on a spectacular journey? If your answer is ‘yes’, then you need to visit Nigeria. As a West African country with a wide variety of ethnic communities, Nigeria has a varied and rich culinary tradition.

They have a myriad delicacies depending on what part of the country a person is. Numerous ingredients and staples cut across state borders as well.

Nigeria has one of the best cuisines in the world, which comprises dishes or food items obtained from the numerous ethnic group that makes up the country. Nigerian cuisine like those of other West African countries such as Ghana and the Benin Republic contains spices and herbs alongside palm or groundnut oil to produce deeply-flavored sauces and soups with an enticing aroma.

Rice is consumed in every part of the country either prepared as coconut rice, jollof rice, and fried rice or processed into the traditional dish Pate, which is a combination of rice with ground dry corn, spinach, tomatoes, onion, peppers, garden eggs, locust beans, groundnuts, biscuit bones, and minced meat.

Pate is commonly eaten in northwestern Nigerian states such as Kano, Kaduna, Nasarawa, and Plateau.

Some of the top soups consumed in the various regions of the country include Banga soup, Miyan Kuka, Okro soup, Ewedu soup, Pepper soup, Egusi soup, Afang, and Edikan Ikon soup. The ingredients used to prepare these soups range from local condiments such as processed locust beans (Iru), to vegetables such as spinach, waterleaf, bitter leaf, and pumpkin leaves.

These soups are generally eaten with ‘swallow’, starchy foods such as fufu, Eba, amala, starch, pounded yam, etc. Due to international influence in the Nigerian food culture by Portuguese, British, Dutch, and other European traders in the early days, spices such as Thyme, Curry, Ginger, Nutmeg, Cloves, Habanero pepper, and Scotch Bonnet are used.

Nigerian dishes never run out of protein. Various meats such as beef, mutton, and chicken and different species of fish are often used to garnish it to your relish. Also common in the southern regions of the country is the use of seafood such as prawns, periwinkles, clams, snails, and crabs for preparing soups and stews. These dishes will blow your taste buds! 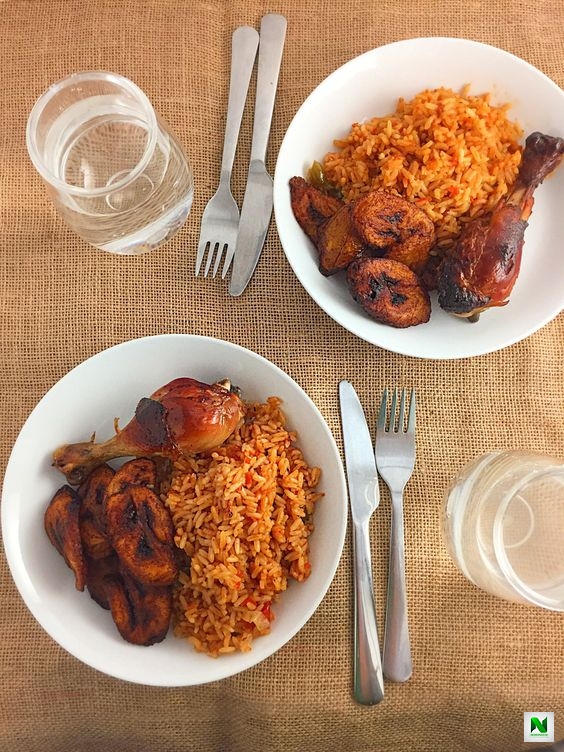 This is one of the most popular foods in Nigeria and is eaten in every part of the country. You may wonder what it is that can be so highly rated and it will shock you to know that it is simply rice prepared with tomato, onion, pepper, and some other spices.

It is sometimes served with vegetables, chicken or beef and fried fish. This dish is not only popular in Nigeria but also in some other West African countries such as Ghana. 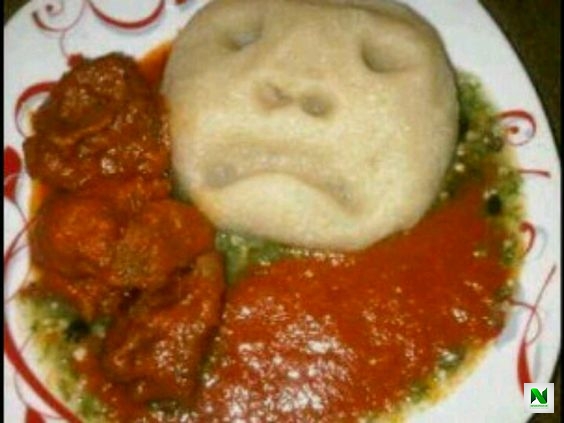 This is undoubtedly the popular staple food eaten in Nigeria. It is consumed in the majority of the households in Nigeria, irrespective of region or ethnicity. Garri is prepared from cassava. The cassava is first harvested, peeled, washed, and ground.

The grounded cassava is drained of water, some starch and hydrocyanic acid before it is sieved and fried in a hot pan. The result of this process is called garri.

Garri can then be used to prepare Eba simply by adding hot water into a bowl containing the desired quantity of garri granules. Eba can be eaten with any Nigerian soup such as Egusi soup, Okro soup, Banga soup, Afang soup, etc.

This is a very soft food served in several Nigerian homes and restaurants. It can be enjoyed with a variety of soups such as Ogbono, Egusi, vegetable, and Afang soups. The prepare Pounded Yam, the desired quantity of yam is peeled, washed thoroughly, and boiled to tenderness.

This boiled yam is then pounded in a mortar until a soft mash is formed. The people of Western Nigeria, called the Yorubas, are known to be very fond of pounded yam, but it is also eaten among the Igbo people of Eastern Nigeria. 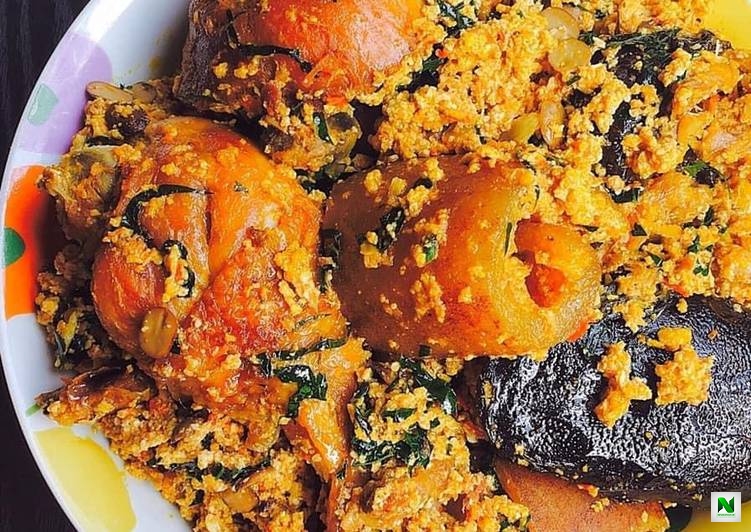 This is one of the most popular soups in Nigeria. It is consumed in several homes especially during celebrations. Its unique texture and fluffiness are some of the qualities that make this soup a special Nigerian delicacy. 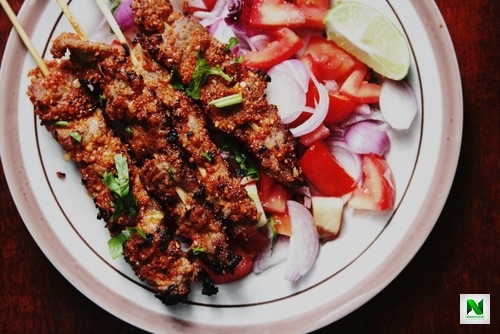 This is simply nicely cut beef that is spiced and grilled over an open flame. It is served with fresh cabbage, tomatoes, and onions. It is usually wrapped with old newspapers or aluminum foil and eaten during the evening.

This spicy delicacy is a specialty of the Hausa people of Northern Nigeria. A special kind of spice mix called Yaji is usually added to the meat before grilling. 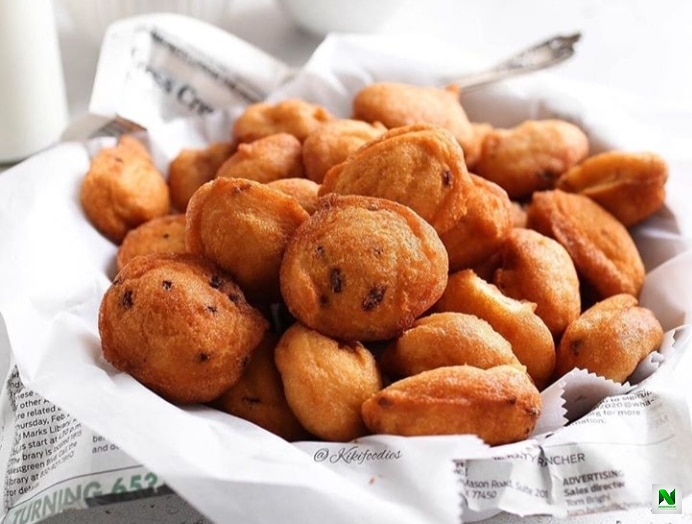 This is another popular Nigerian delicacy. It is called Kosai in the Northern parts of the country. It is simply bean cake deep fried in either palm or groundnut oil.

The beans are first soaked in water to remove the skin and then ground to a mash that is then deep-fried. Another kind of Akara can also be prepared by frying grated water yam. 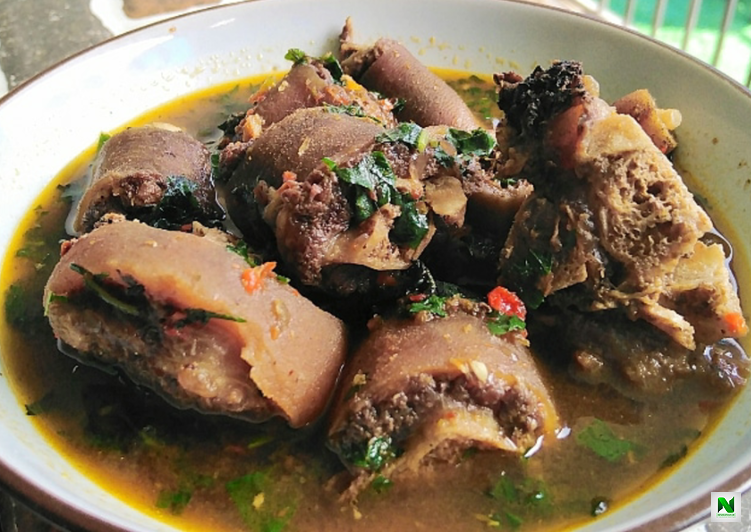 This is also a very common delicacy eaten in almost every part of the country. It usually contains a plethora of beef, chicken, mutton or fresh fish. It is usually sold at bars where it is accompanied by beer.

It is a very healthy soup due to the natural spices used to prepare it. A touch of pepper soup on the tongue leaves an unforgettable taste that will keep you asking for more. It is very spicy, delicious and comes with a nice aroma. 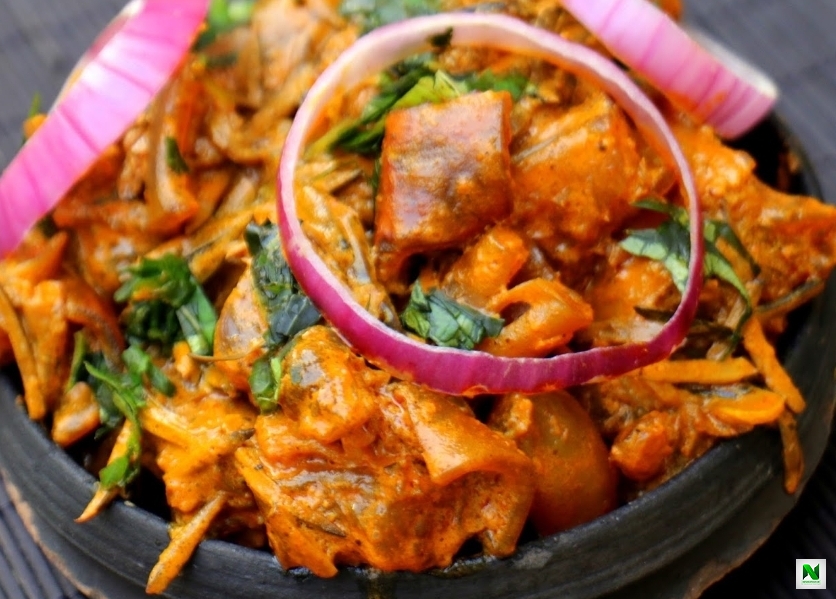 This is a very common soup among the Igbos of Eastern Nigeria. Nkwobi is prepared from cow legs and head, and is mostly a traditional dessert, adequately garnished with Utazi leaves and palm oil. It is usually eaten with a glass of palm wine, which is said to be the best drink to flush it down the belly. 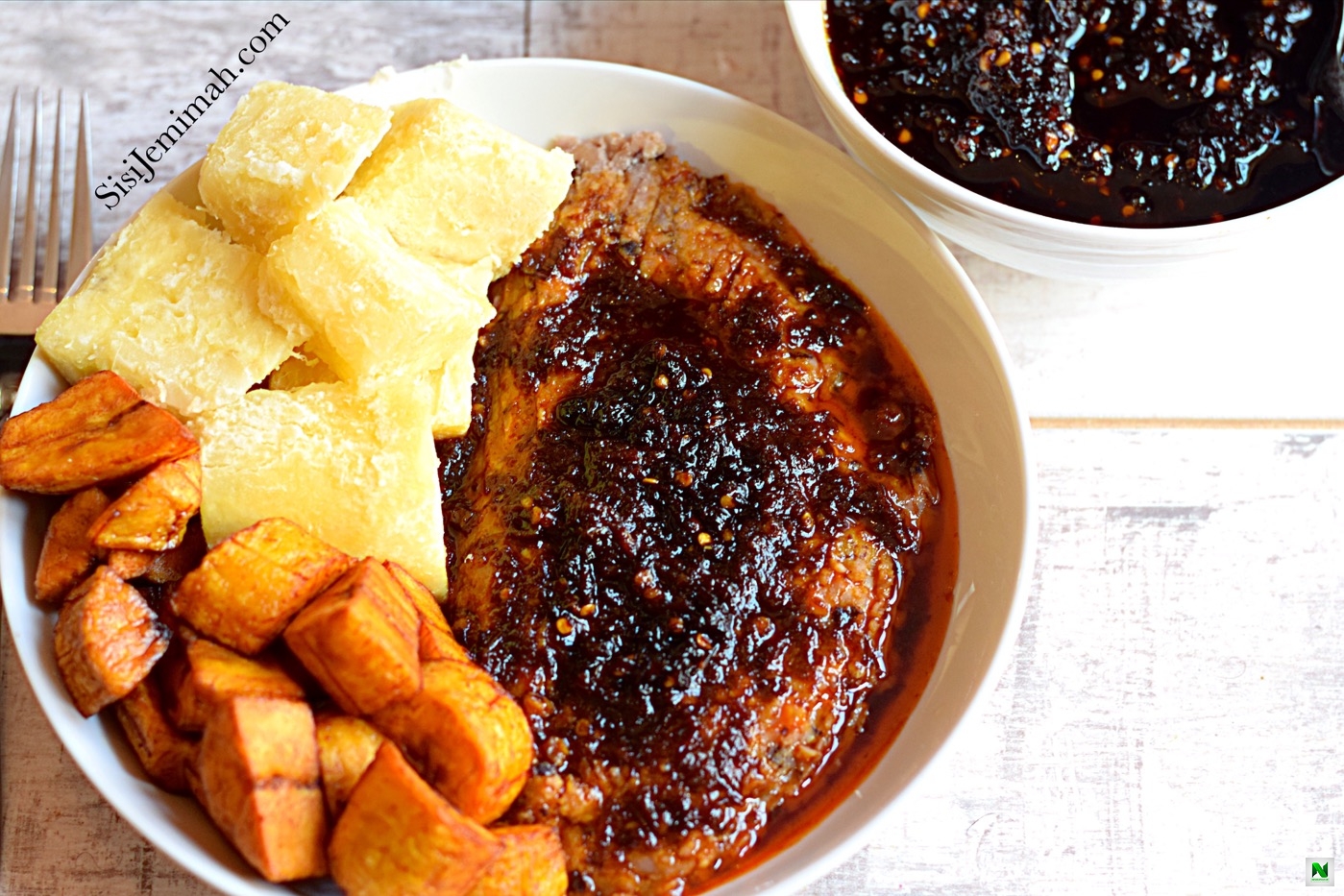 This is a delicacy that is very popular among the Yoruba people of Western Nigeria. It originated from the Benin Republic. Ewa Agoyin is cooked mashed beans eaten with pepper sauce.

This sauce is made not just from pepper but also involves onion, tomato, crayfish, and some spices. This combination produces a taste that will make you ask for more. 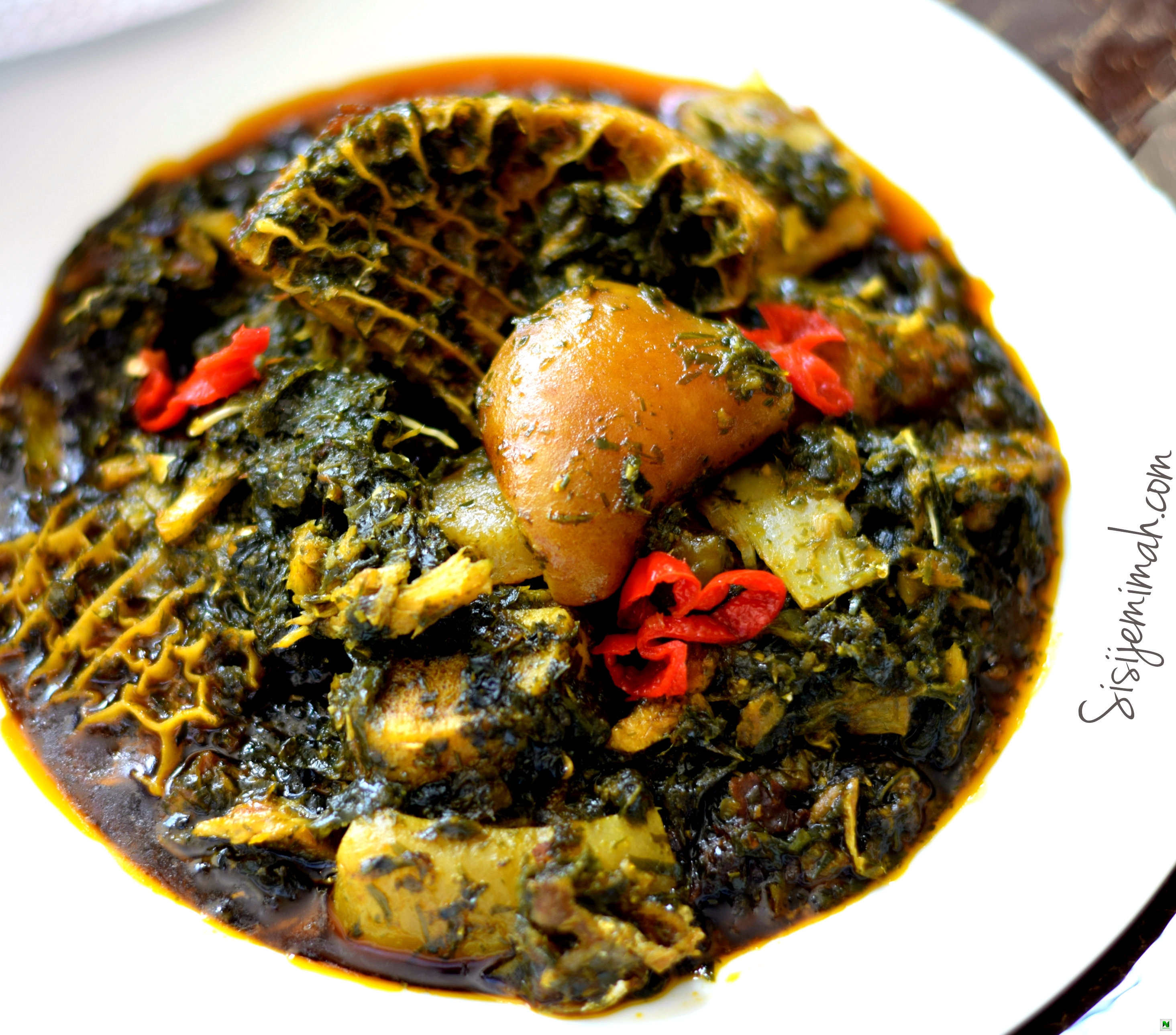 This is another popular soup in Nigeria. It is mostly associated with the Efik tribe of Southern Nigeria. Afang soup is a vegetable soup prepared with meat, stockfish, and seafood such as prawn and periwinkles.

The leafy vegetable normally used to prepare this delicious soup is the Afang or Okazi leaves. Due to its toughness, the leaf is sliced into very tiny bits. Afang soup is best served with Eba, fufu or pounded yam. 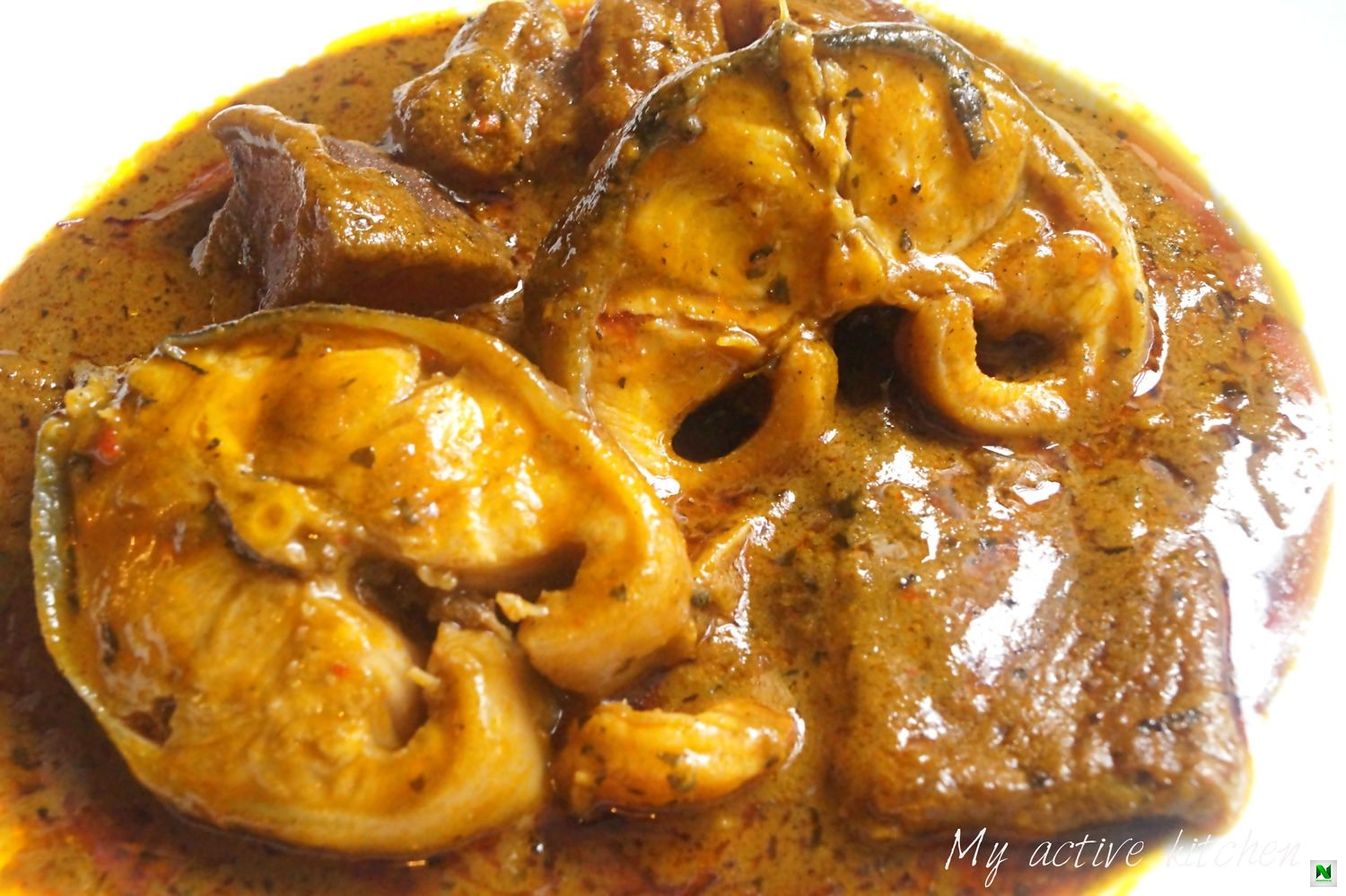 This is a very popular soup in Nigeria, mostly common in the southern region of the country. This delicious soup is made from ripe palm fruit and adequately garnished with meats, fish and other special ingredients that give it a unique aroma and taste. It is mostly eaten with starch and sometimes white rice. 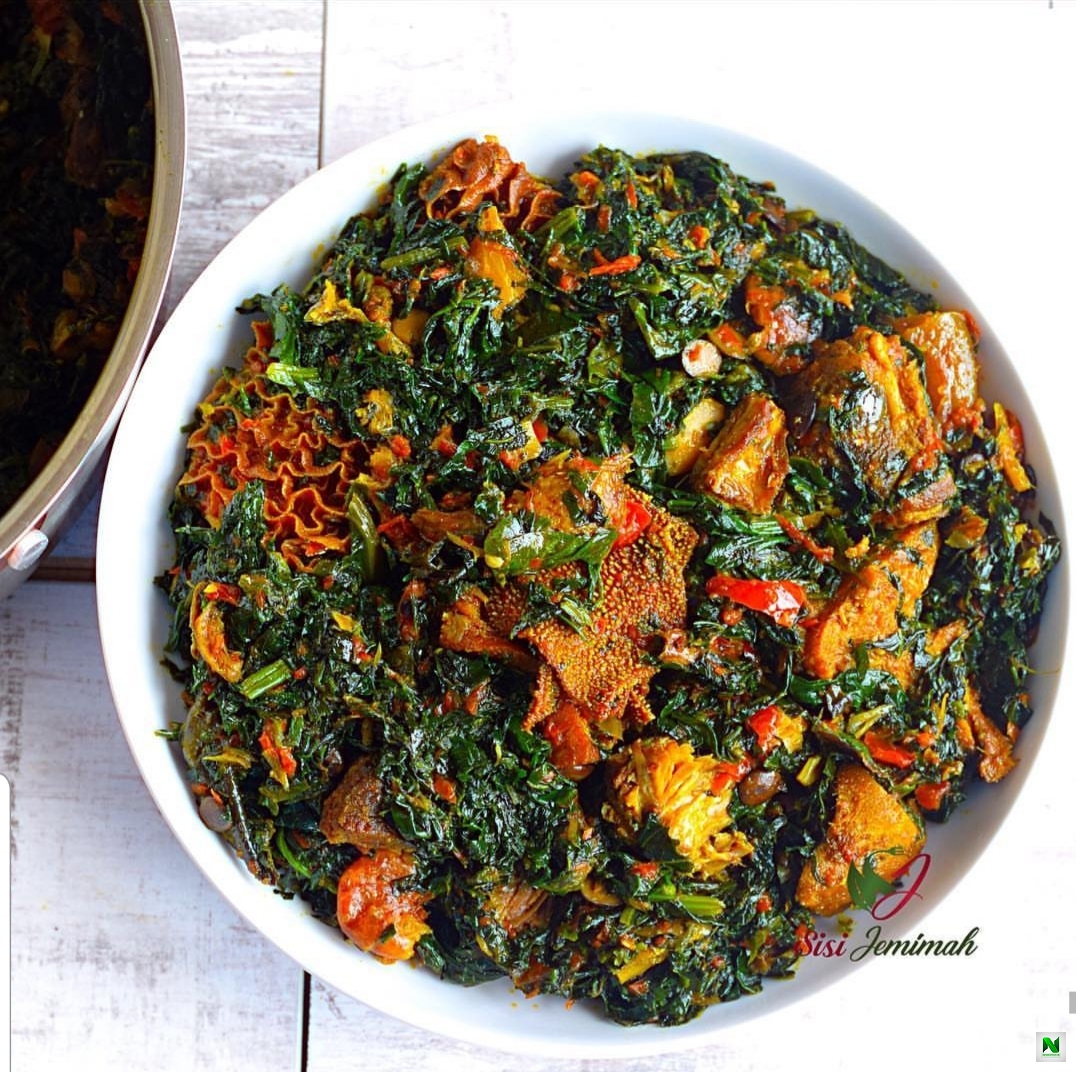 This is a very delicious Nigerian soup, which is mostly associated with the Yoruba people of Western Nigeria. Efo riro is made with a combination of pumpkin leaves, chicken or smoked fish, and beef. Vegetables like water leaf and spinach can also be used in place of pumpkin leaves. 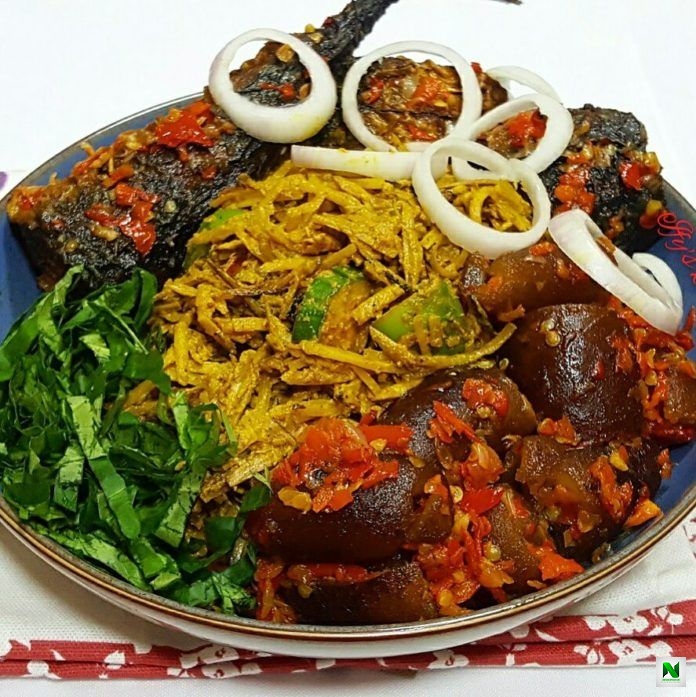 This is another Nigerian food common among the Igbo people of Eastern Nigeria. It is also called African salad. Abacha is prepared from cassava, which is first properly cooked, then grated before being sun dried. These sundried cassava flakes are then used to prepare Abacha.

This delicious delicacy is made with sliced Ugba (oil bean seed) and some fresh vegetables. It is mostly served with fried fish and ponmo (cowskin) and eaten as a dessert. 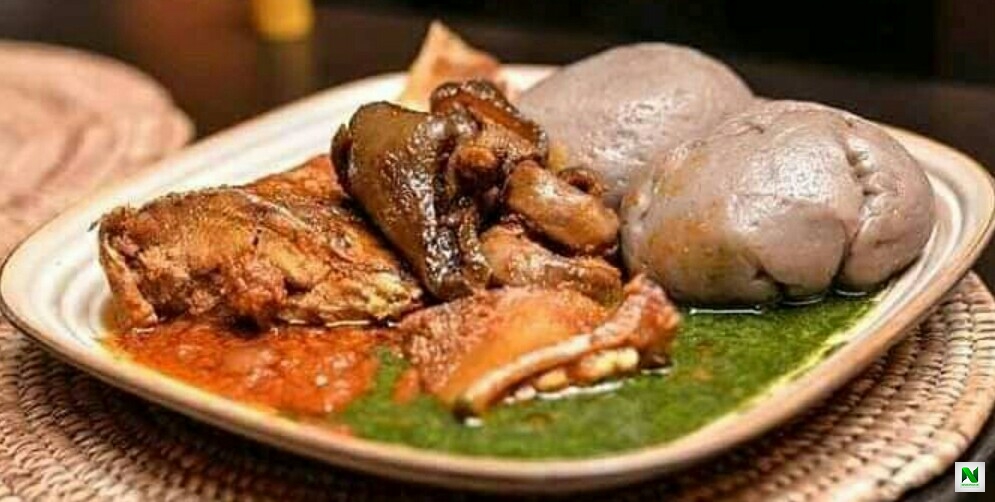 Ewedu is a delicious soup mostly associated with the Yoruba people of Western Nigeria. It is, however, a very popular delicacy in the country. Ewedu soup is made from the leaves of a Jute plant that is blended into a mucilaginous form such as okra soup.

Ewede soup is usually garnished with a lot of meat and ponmo (cowskin) and best served with Amala. A tomato-pepper sauce can also be added to the Ewedu soup to accommodate for the slight bitterness possessed by the Jute plant leaves. 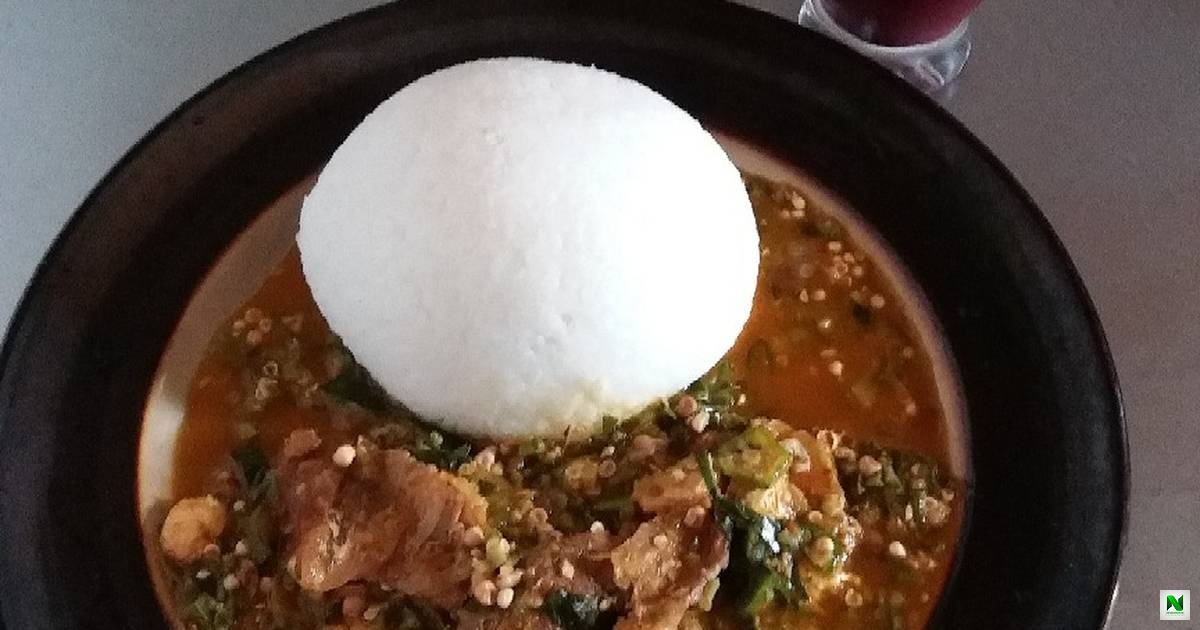 This a very popular dish is associated with the Hausa people of Northern Nigeria. The word “Tuwo Shinkafa” means “mashed rice”. It is prepared by boiling rice to tenderness and then mashing it into a semi-solid form. It is served with soups like Miyan Kuka, Miyan Kardashi or even bean soup. It is usually eaten as either lunch or dinner. 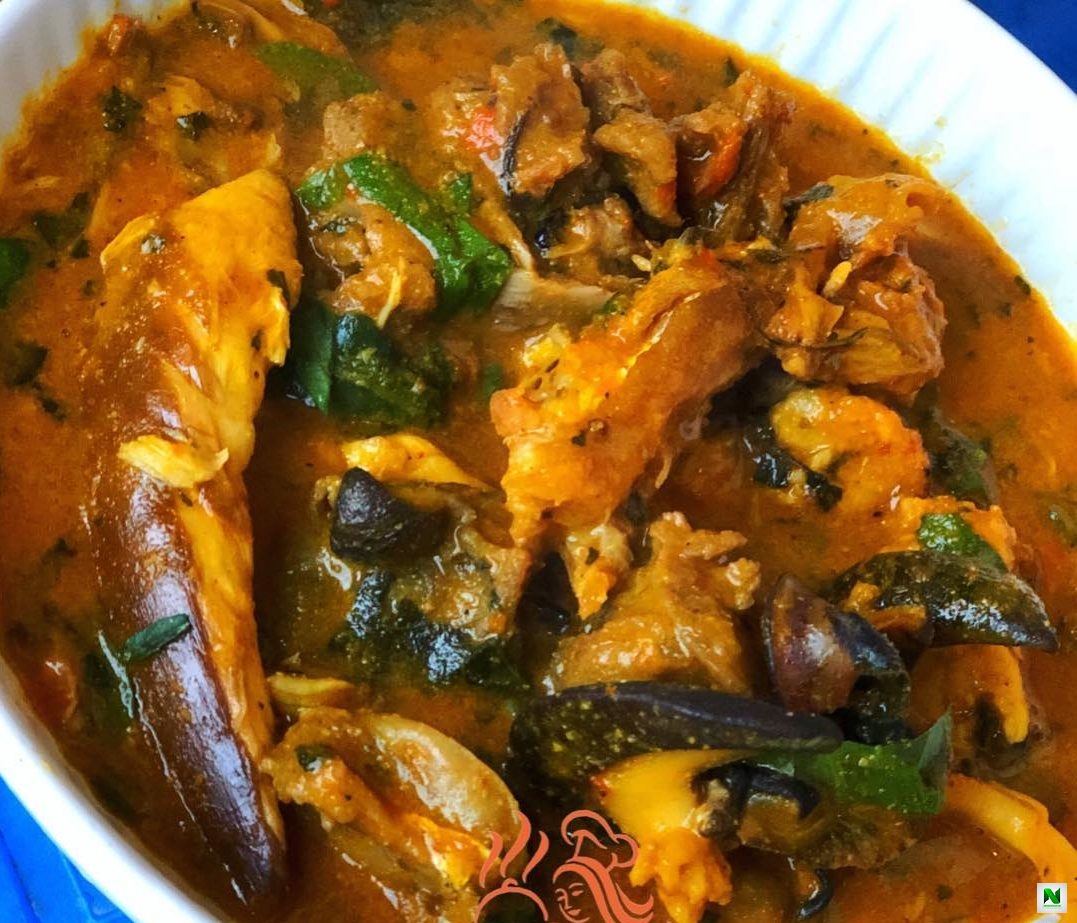 This is another important soup eaten in Nigeria. It is prepared from the seed of bush mango (a wild variant of mango) with oil, meat, stockfish, dried fish and other condiments. Ogbono soup is normally served with Eba, fufu or pounded yam.

The slippery texture of Ogbono soup earned it the sobriquet “draw soup”; this characteristic makes it go well with Eba or fufu balls. It is said to be one of the easiest soups to prepare.Pho