Tottenham Defender, Eric Dier Leaves Pitch During Chelsea Match To Use The Toilet
By 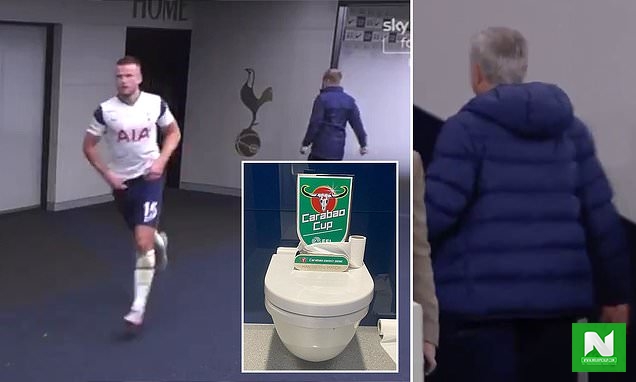 Jose Mourinho will have chased after many players in his managerial career - but surely never for the reason he sprinted after Eric Dier on Tuesday.

In the 77th minute of Tottenham's Carabao Cup tie against Chelsea, with Spurs 1-0 down, defender Dier suddenly raced off the pitch and headed straight down the tunnel.

Manager Mourinho set off in hot pursuit and TV cameras inside Tottenham Hotspur Stadium showed the manager disappearing into the changing room seconds after the defender.

So what could possibly have prompted Dier to leave the field with just over 10 minutes remaining in a cup tie his team were losing?

"Everyone can imagine!" a grinning Dier said after the game.

"I don't know if Jose understood what I was doing to begin with. I told Pierre-Emile Hojbjerg and Toby Alderweireld as I was going off, I simply had to go.

"I was struggling with stomach cramps, it had got too bad."

Duly relieved, Dier emerged back on to the pitch a couple of minutes later, followed by Mourinho, who was also a little less frantic.

Dier added: "Jose wasn't happy but there was nothing I could do about it, nature was calling."

Fortunately for Dier, team-mate Erik Lamela equalised with seven minutes left and his side progressed on penalties.

Dier, who missed a penalty as Spurs were knocked out by Chelsea in a shootout in the 2019 semi-finals of this competition, was the first home player to step up for the spot-kicks and he coolly converted.

'I understood what was happening - I went to try to make it happen faster' - Mourinho
The victory meant the manager was in a much better mood to talk about the toilet incident afterwards.

"What happened to Eric Dier is not normal, I have to praise him in a special way," said Mourinho.

"It should be forbidden for a player to play two games in 48 hours at this level [after he played against Newcastle on Sunday]. What he did is not human to do.

"He had to go - he had no choice. Maybe it is a normal thing when you are completely dehydrated, which is the case. I had to put pressure on him to get back but he is a great example for everybody."

Spurs played Newcastle on Sunday and Chelsea on Tuesday, but continue their arduous fixture schedule by facing Maccabi Haifa in the Europa League on Thursday followed by a trip to Manchester United on Sunday.

Mourinho said: "When Dier went off I understood immediately what was happening, I went there to try to make it happen faster, to put pressure on him.

"It is a consequence of his physical state, he had no energy in his muscles. I don't want to believe that we have another week like this one.

"If the authorities don't care about players, I care."