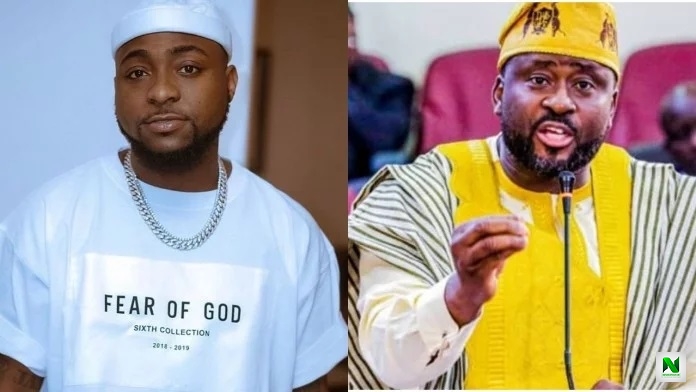 Celebrities and other Nigerians have taken to their SM pages to criticize Nollywood actor turned politician "Desmond Elliot" for allegedly pushing for social media regulation.

Recall that few days ago, Desmond Elliot was called out on Twitter over calling for an anti-social media bill. The actor turned politician however denied the allegations.
Well, a video that captured the moment the lawmaker representing Surulere constituency in Lagos, Desmond Elliot called for social media regulation has been making the rounds online.

Celebrities didn't take it funny as they took to their SM pages to blast him.
Below are some celebrities comments:

“Desmond Elliot tho… can’t trust anyone in politics. Kai e fall my hand”

“Desmond Elliot called us all CHILDREN. Just imagine!!!! I’m happy he has advised we go get our PVC. E go shock them all when the time reach. “The same Social media you used in campaigning, the same Influencers he paid to campaign for him and the same youth who voted for him have all turned CHILDREN in his eyes. Desmond elliot wey be say Na only bucket of water he buy take use as hand sanitizer for him area during COVID wants to tell us how to use Social Media”.

Desmond is a very silly and stupid boy. A big shame!

But Desmond Eliott you know that you represent the people. SPEAK FOR THE PEOPLE, NOT TO SAVE FACE. THERE IS HUNGER IN THE LAND.[quote]

Uche Jumbo:
[quote]The same social media they "USED" to package themselves into power.
APC was package here... on twitter with "change"

Desmond Elliott was acting for his political godfathers to see his loyalty. He is ambitious. He does not believe what he said. He believed he was writing a promotion exam. And he felt that the person that would grade his paper is Bola Tinubu. But Nigeria has changed. Power has shifted to the people. Even Bola Tinubu himself can’t recover from the effects of the last two weeks. Desmond Elliot expects someone who can’t save himself to save him. Alas, he unwisely chose to be the proverbial fly that followed the corpse into the grave. Tinubu is now a political corpse. He once had the Midas Touch. But now, all that Tinubu has left is the Leprous Touch! Desmond incurred the wrath of forces more powerful than his godfathers, and they may sacrifice him to appease that force

Cousin Desmond should have used the same energy to fight for us. Now he's collecting money, we're "children". You can see it's not about age. You can be 22 years old and wicked. "Celebrities yen yen"...they didn't vote for celebs, they voted for you sir.

Watch the video Desmond Eliot made the statement below: