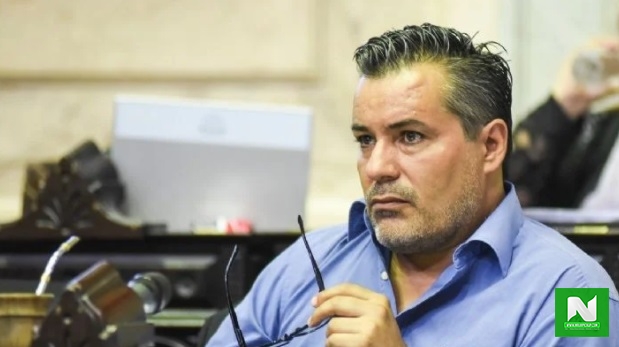 A lawmaker in Argentina has been suspended after he was spotted kissing a woman’s breast during a virtual session of congress.

Juan Emilio Ameri, who represents the northern province of Salta, was seen by both colleagues and members of the public committing the lewd act as the chamber of deputies held a special meeting broadcast on Zoom.

Footage of the incident quickly went viral on social media, sparking outrage and quickly leading to a vote in which the 47-year-old was suspended pending an investigation.

In the footage, Mr Ameri, who is in the ruling Frene de Todos coalition, can be seen sitting down in front of a web cam with a woman on his lap.

As another politician addresses his colleagues, Mr Ameri puts his face to the woman’s chest, before pulling down her top and appearing to kiss her breast.

Following his suspension, Mr Ameri said the woman was his partner and that he believed at the time he was not connected to the meeting.

“I’m very ashamed, [I feel] very bad,” Mr Ameri said, according to the Buenos Aires Times. “Here, throughout the interior of the country, the [internet] connection is very bad.”

Mr Ameri added he gave his partner “a kiss” because 10 days ago she underwent breast implant surgery.

The deputies meeting was immediately interrupted, with speaker Sergio Massa telling colleagues he needed to report a “serious offence” against the “normal decorum and operation” of the lower house.

Ms Massa’s proposal to create a commission weighing up Mr Ameri’s expulsion from the chamber was endorsed, and the father-of-three now faces a wait of up for five days for the decision.

It is not the first time a virtual meeting has tripped up a politician since their use became widespread with the onset of the coronavirus pandemic.

In April, a California state official was forced to resign after he was seen in a Zoom meeting throwing his cat and making derogatory comments about “little b******”.