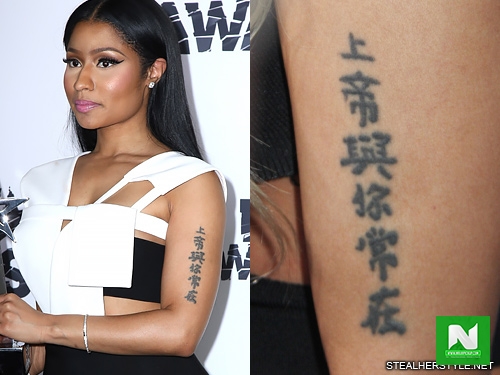 Nicki Minaj drew a tattoo of a Chinese writing with 6 characters on her left arm at the age of 16 which means "God Is with me always". it was supposed to be placed on her but she reviewed the decision and decided to draw it on her left arm. She also drew a Barbie tattoo on her wrist in 2018 after the Famous one she drew when she was 16.

She did not draw the Chinese tattoo on her neck because she thought the process will be painful.

She made reference to her tattoo in a track titled Chun-Li through the lyric saying "Chinese ink on".

Nicki Minaj is one of the world most famous female celebrity who has been featured in more than 60 song and has released four studio albums, three mixtapes and one hundred and fifteen singles, including seventy as a features artist and fifteen promotional single.