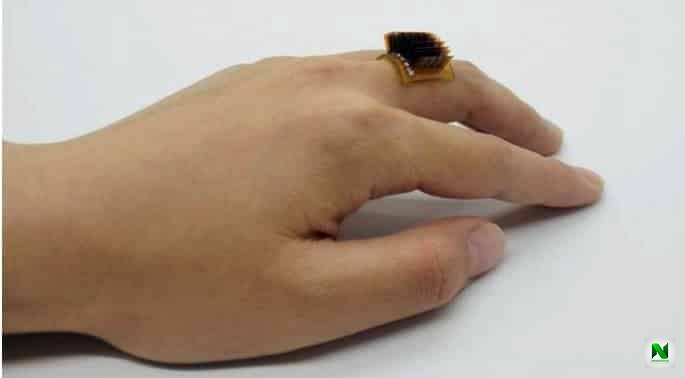 Scientists have developed a wearable device that uses your body heat as a battery.

Our bodies maintain a constant temperature of around 37 degrees celsius to allow the chemical reactions that keep us alive to happen. But it isn’t a particularly efficient process and a lot of that heat we generate is lost through our roughly two square metres of skin.

This new device uses thermoelectric generators to harness the difference in temperature between your skin and the surrounding air, turning that heat energy into electricity. Created by a team at the University of Colorado Boulder (CU Boulder) in the US, it is made from a stretchy material that fits close to the skin and can be worn as a ring or a bracelet.

It is also self-healing which means it can reconfigure and fix itself as you move. If the device tears, it can be pinched back together sealing itself within a matter of minutes.

Currently, the ‘wearable’ can generate around 1 volt of electricity for every square centimetre of skin. Although this is less than most batteries it is enough to power something like a watch or fitness tracker.

Jianliang Xiao, senior author of the study, says that the new development means in the future wearable electronics could be powered without a battery.

“Whenever you use a battery, you’re depleting that battery and will, eventually, need to replace it. The nice thing about our thermoelectric device is that you can wear it, and it provides you with constant power.”

During outdoor activities, the side of the device that isn’t harvesting your body heat (the “cold-side”) also deflects solar radiation and increases something called “radiative sky cooling” to make it more efficient.

This process cools an object by allowing heat to escape the atmosphere as a particular wavelength of light into the universe. Similar principles have been used in the past to create solar panels that are able to generate electricity at night. The team at CU Boulder say the materials this wearable tech is made of are easily recyclable.

When you are done with the device it can be placed into a special solution that dissolves the stretchy polyamine base and separates out the electrical components so that they can be used again.

The liquid can then also be turned back into a new polyamine film which the team of scientists used to create a new device. Despite being broken down into its component parts and then remanufactured, this new device was found to have a power output that was similar to the original.

“We’re trying to make our devices as cheap and reliable as possible, while also having as close to zero impact on the environment as possible,” Xiao says.

He believes the tech could be on the market within 10 years “delivering the next-generation high-performance, adaptable, customizable, durable, economical, and eco-friendly energy-harvesting devices”.

"She Always Wrote My Name As A Noisemaker In School, Now We Are Married" (Photos)
Big Brother Naija Season Six Returns, See Grand Prize
Share to...